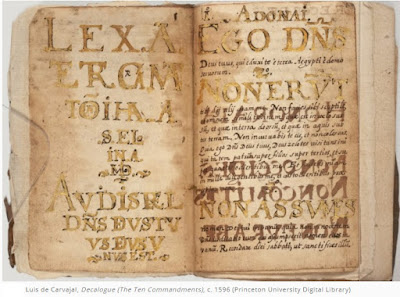 
Luis Rodriguez de Carvajal, "El Mozo" or "The Younger", was the nephew of Luis de Carvajal y de la Cueva - "the Elder" for the purposes of this essay. The Elder was a "New Christian", which is to say a publicly converted Jew, who became an Admiral in Spain, defeated John Hawkins in a battle off Jamaica, and was appointed governor of the frontier territory of Nuevo Reino de León, in the north-eastern part of modern-day Mexico, a region which comprised one-fifth of Spain's territories in the New World, and from where he invited his relatives in "converso" Europe to join him.

But "the Elder" had no power over his own family's religious inclinations: his wife, Guiomar, continued to observe her Judaism in secret and refused to accompany him to Mexico precisely because this would be impossible there. Her sister Francesca was even more determined; she and her husband and their nine children took their secret Judaism with them to Mexico, and for nine years their secret remained undetected. "El Mozo" was sent to a Jesuit school at Medina del Campo, where he was trained as a calligrapher, and where the emphasis on scripture rendered him, by bizarre irony, extraordinarily knowledgeable in both Jewish texts and Jewish law.

Being appointed as an aide to his uncle gave him the opportunity to travel, and where he travelled he also taught other conversos and led religious services. At the same time, as Dr Ronnie Perelis describes it in his account of "El Mozo": "he began to compose an electrifying spiritual autobiography", writing "his life story in tiny, lucid script in a small leather-bound book that he kept hidden on his person throughout his travels. In these writings, he charts the guiding hand of Providence in his spiritual adventures, and his last entry tells of his planned escape to Italy."

Escape, because the secret Judaism of the Carvajals had been discovered. Alas, arrest precluded that escape, and the autobiography which was intended as his testament to God and to posterity merely provided testimony at his trial. On March 14th 1590 the Carvajals were brought to an auto-da-fé, where "reconciliation" was achieved, but only theoretically (click here for more detail). Whatever promises were made in place of burning, they were not kept, and on December 8th 1596 "El Mozo", his mother, three sisters and a number of other "Judaisers" were committed to the fire by the Inquisition for the heresy of subscribing to the original faith of Jesus Christ.

After the auto-da-fé, the autobiography, along with other of Carvajal's writings, were kept for no imaginable use, and therefore ignored for three hundred years, in the Mexican National Archives, though fortunately a man named Alfonso Toro made a transcription of them in the early years of the 20th century. Fortunately because, in 1932, they disappeared, believed stolen. Eighty years later they re-appeared at an auction in London, anonymous and thought to be of little value; the collector Leonard Milberg heard about them, brought his expertise to look at them, recognised what they were, alerted the authorities, and arranged for their return to Mexico, though not before the New York Historical Society was given the opportunity to exhibit them, to the general public, but especially to the historians. Amongst that latter group the aforementioned Dr Perelis. 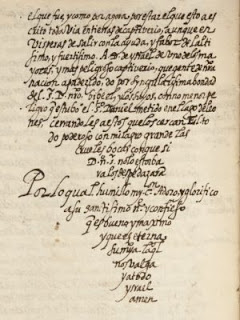 "The small bundle of manuscripts," Perelis recounts, "seemed to be inviting me in with their neat lines of tiny script. The first section was like meeting an old friend, or seeing the face of a longtime pen pal. I knew the lines of Carvajal's autobiography inside and out, but I had never seen them in his own hand, nor did I know about the small side notes and elegant arrangement of the heading - the dedication to the Lord of Hosts that announces the beginning of his tale - nor the way he arranged the last lines in a final triangular flourish. Those details point to the fact that it was a text he went back to, added to, and revised. It also tells me that he really thought that he was about to escape the shadow of persecution and that his story of trials and tribulations was coming to a favorable end.

"But then I encountered works I had never known about, like 'El modo que es de Rezar' ["The way it is to Pray" would be a literal translation], a guide to prayer for himself and for his fellow secret Jews in Mexico, and a list of the acts of mercy that the 'most high God performed for Joseph' - Joseph Lumbroso — Joseph the Enlightened, his literary name for himself in his book "Memorias", a review of the major events of his short and tumultuous life.

"Right before this list, which takes up two pages, I found a section with the ten commandments in Latin, written out in beautiful large letters with gold leaf. New questions emerged: I knew Carvajal was an expert calligrapher, but where would he have had access to the materials and knowledge of the technique to apply the gold leaf?

"There is another page towards the end with a list of Jewish holidays and their corresponding Christian dates, along with another column featuring the name of the Hebrew months and a list of transliterated Hebrew numbers from one to ten - a Hebrew primer for a fully Latinized Converso Jew? What follows is even harder to understand - some psalms in Latin and some prayers in Portuguese, along with some deeply cryptic lists that seem to be mystical codes waiting to be deciphered."

In Mexico today, when Luis de Carvajal "the Younger" is remembered at all, it is not for his Judaising, nor for his uncle's achievements, but for that autobiography, those letters, and for his last will, all of them now regarded as amongst the finest bellas lettras in that country's history. Some of them were published by the University of Miami Press in 1967, under the title "The Enlightened", translated by Seymour B. Liebman from the Alfonso Toro transcripts; they had been made public through the Publicaciones del Archivo General de la Nación, v. 28, after the disappearance of the originals, in 1935 - but these alas amount to a mere 157 pages, a fraction of his total output. The Milberg papers can be seen in digital form on the website of Princeton University, but the rest of Carvajal's literary remains are only available in the inventory of banned and lost books in the Invisible Library, for which this blog-entry provides another chapter.

I have no evidence to prove it, but such evidence as does exist suggests that this was the very same family Carvajal with whom, one hundred years later, Oliver Cromwell negotiated the return of Jews to England, and Guiomar Carvajal, the Elder's wife who declined to make the journey to New Spain, is likely the great-grandmother of that English immigrant. The story of Cromwell's Jews is told in my entry for September 30, and a very strange but historical tale of how "The Hidden Jews of Cartagena" in Colombia enabled the return of Jews to England under Cromwell, will appear in my collection "Travels In Familiar Lands", due for publication very soon.

Mary Stuart, Queen of Scots, born today in 1542 - though I shall probably move this to her death-date, which was on February 8th 1587, at Fotheringhay Castle in Northamptonshire. An account of that death will be found in my novel "The Plausible Tragedy of Roderigo Lopes", likewise due for pubication very soon. 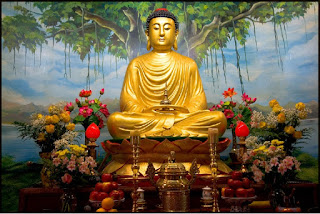 And today, but at Bodh Gaya in India rather than at his family's Kshatriya Castle in his native Nepal, while sitting underneath a fig tree, Siddhartha Gautama, the Sakyamuni Buddha, gained "perfect enlightenment", whatever that might be. Year? Unknown. Some time in the 6th century BCE.