I have very few memories of my uncle Kai from Norway, who was anyway only an uncle by marriage. My dad's middle brother had married Hettie Davis, and it was her sister Thelma, the artist Thelma Patricia, who left England around the time time that I was born to marry him, and parent Lynn and Leslie, with whom I spent many hours on their family visits to England throughout my childhood. Did Kai die young, or Thelma divorce him? I don't know. Only that he disappeared from my memories quite early on, while Thelma and the children were there until I too left home; disappeared, indeed, the way a man might disappear in a Nazi deportation, picked up and vanished without trace for years, and nothing to recall him by except that number tatooed on his arm, his concentration camp number. Kai's was the first I had ever seen, aged five or six I think, and for a long time I didn't even ask what it was there for, because some instinct told me that it wouldn't be a good idea to ask. He got it, I lerned later, at Bergen-Belsen. 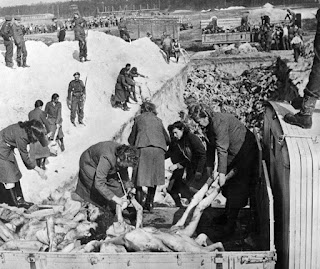 What follows below is in part adapted from the website:  http://www.holocaustresearchproject.org/nazioccupation/norwayjews.html:


The Nazis invaded Norway and Denmark on the 9th of April 1940, thwarting the combined heroism of Norwegian, British, Polish and French forces. Afterwards there was resistance, but it was abject in its heroism, and only led to more reprisals - the bombing of the Lysaker Bridge linking Oslo to its airport in Fornebu, for instance, for which thousands paid with their lives.

In the meanwhile King Haakon had fled, and every politician who could find a way out likewise, all of them stating their determination etc etc, but in empty words. Their replacement in Oslo was a government led by the the former Defense Minister, now the leader of the local Nazi party, the vile Vidkun Quisling (yes, that's where the name Quisling comes from that is now part of our language; and no, I am not going to glorify him with a photograph). Not surprisingly, Quisling called for capitulation to the invaders. 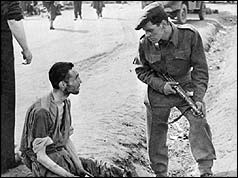 It was February 1942 when that call was answered, Reichskommissar Josef Terboven giving him the formal authority to run Norway in the Fuhrer's name, and bringing every civilian institution from the police to the civil service under that authority. So the Nuremburg Laws applied in Norway too, introduced by decree in May 1940, when Jews were instructed to hand in any radios in their possession. Registration of Jewish property began that October, with many Jewish businesses quite simply confiscated, most of the rest declared bankrupt by the "Liquidation Board of Confiscated Jewish Assets" which Quisling set up for the purpose; by treating them as bankrupt, their assets could be sold, but they continued to exist as legal entities, which allowed expenses to be levied against them and further money thereby obtained. (This practice remained in effect even after the war, when a democratic government was established again in Norway.) Anything made of gold or silver was handed over to the SS; the rest stayed in Norway, and by the end of the war it was estimated that about 30% of those stolen assets had been sufficient to cover all the expenses of the "Liquidation Board"; no documentary evidence of what happened to the other 70%. 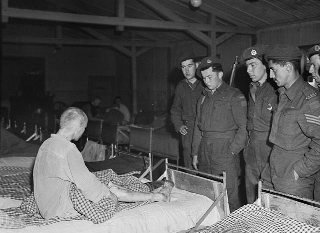 The stamping of Jewish identity cards with a simple red 'J' began in January 1942. The first arrests too that month, the victims sent to prisons or labour camps inside Norway, though not yet the 1,700 Jews who had come to Oslo as refugees from Germany. That would happen in June 1942, when a reception camp for Jews was established at Berg, near Tonsberg, followed by a general registration of all Jews, and the completion of the confiscating of all Jewish property by October. The Chief Rabbi, Julius Samuel, had been arrested on September 2nd, with more than 200 other men; a group the same size was arrested on October 25th - these however were not sent to Berg, they were shipped directly to Auschwitz-Birkenau. 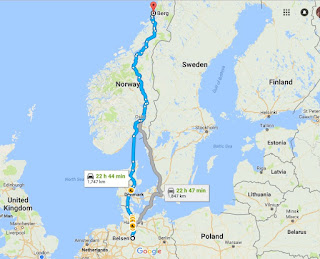 But this is Berg, in Norway, not Bergen-Belsen, which is in Lower Saxony, in northern Germany, 1747 kms, just over a thousand miles due south. And I am inclined to think that, maybe, English family members hearing Berg thought they were hearing some shortened form of Bergen-Belsen. Unless Kai, at some point, had left Norway for somewhere further south in Europe, and was rounded up there. I have no way of finding out.


And does it really matter, in the end? Ungassed, but tatooed, both physically and, more important, mentally, Kai survived, and if it was Berg and not Bergen-Belsen, then he must have been among those who were in the third round-up, the one in November 1942 which was not included in the Auschwitz transport, but rather were imprisoned at Bredveit prison in Oslo to await deportation to Poland. Three months later, on February 24th 1943, along with twenty-five women from the concentration camp at Grini, one hundred and fifty-eight of those were taken on the steamer Gotenland to Stettin, from where they too travelled to Auschwitz, most of them to be "employed" at the Monowitz sub-camp. Only thirteen of those survived the war; maybe Kai was one of them.

Most of the remaining 930 Norwegian Jews found ways to escape across the border into neutral Sweden, where they stayed for the remainder of the war. Many others went into hiding, or gained exemption from deportation by marrying Aryan women and accepting internment inside Norway. Some found other ways to get out of Norway, hoping to make it to Scotland - the nearest safe place by boat.

Unlike Auschwitz-Birkenau, which lives on as a museum- and hopefully will for all eternity, or at least until the human race has finally learned its lessons, and implemented them irrevocably, which is probably just a complicated way of saying "for all eternity"- unlike Auschwitz-Birkenau, when Bergen-Belsen was liberated, the British burned as much of it as they could; and not for the pleasure of vengeance through destruction nor with the purpose of destroying history, but because there was no other way to rid the place of quite so many rats and lice and other vermin that would have spread their diseases otherwise. As Camus described it at the end of his novel "La Peste", the fire, even the fire of Hell itself, is insufficient. 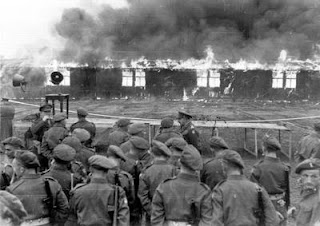 Samuel Johnson's "A Dictionary of the English Language" published, today in 1755.

Theodore Rousseau, French painter, born today in 1812, and less well-remembered than either the philosopher Jean-Jacques or the tax-collector Rousseau (for whom see May 20), but actually one of the key founders of Modernism - the Barbizon movement, following on from Claude and Poussin, broke with the rigid requirement to paint à la Neo-Classique and set out in the style of Constable to paint nature. (I feel an essay coming on, but those lights are stuck on amber...)

Henry James, born, in Washington Square, New York, where else? - today in 1843

Bessie Smith, the original Chattanooga Choo-Choo, though there was nothing Choo-Choo about the way she delivered those blues, born today, in said town, in 1894.

And today in 1980, Jean-Paul Sartre, philosopher, author, playwright, and househusband of Simone de Beauvoir, ceased to be existential (though of course he remains essential, to literature and philosophy anyway - I shall try to find a way to phrase that so that existence may precede essence while essence definitely proceeds from and outlives existence; any offers of help will be coolly appreciated).