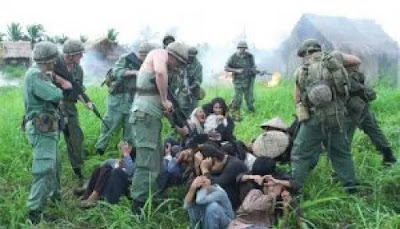 Nathaniel Hawthorne's "The Scarlet Letter", published today in1850; click here for my piece about it in "Private Collection"


I don't really want to fill up pages and pages of this blog with dates and details of the Holocaust, but sometimes it really is necessary, because there are dates and details from which we can learn, should learn, must learn... and then there are even more dates and details which confirm that we simply are not learning, do not wish to learn, will never learn, and that therefore we cannot, dare not, must not allow ourselves to get tired of seeing Holocaust dates and details everywhere and all the time. So I note that, today in 1939, the Nazis occupied what was then called Czechoslovakia, and I do so because, today, in

... those role-models of Liberty, Enlightenment, Opportunity and World Domination At Any Cost, yes I do mean the Americans, added yet one more act of role-modelling to their illustrious history: the My Lai Massacre.

I am not going to retell the tale - there are websites and books a-plenty. The two that I have chosen as my links (here, and here) are significantly different, and chosen for that reason: one is a complaint that no one has ever really faced up to the responsibility, the other actually manages to celebrate an American "hero", and thereby avoid the nasty business altogether. Both are American; it seems to me essential to look at this through American eyes, in order to try to understand what, if anything, My Lai has changed in the way that Americans think of themselves, their values, their gun-culture, the way they make their movies and TV programmes, their involvement in wars around the world (ten, at the moment of writing this: July 2019), their condemnation of other people's war crimes, their current threats, at the moment of my writing this, against Iran, Syria, the Yemen, North Korea... and through this what, if anything, the world has learned, and changed, in the ways that we engage in politics, and economics, since that last apocalyptic event since the previous one which changed everything, but of course it didn't.

Posted by David Prashker No comments: 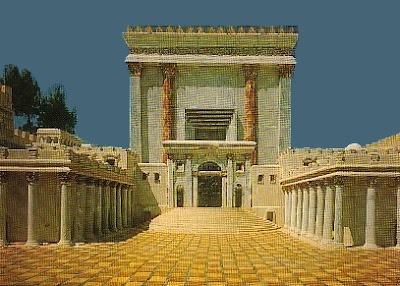 Some dates in history are simply ludicrous, even beyond the level of "how do they know?". But the almanacs insist, that March 10th 515 BCE was the date on which the Second Temple in Jerusalem was completed; the work, incidentally of one Zeruv-Babel, or Zerubabel, or Zerubavel, or possibly someone else altogether.

And the year may very well be correct - Jewish historians, theologians and commentators argue the matter with great passion, because that is the key dynamic of our culture, but they argue in the narrowness of 522 BCE as the probable starting-date, and 514 BCE as the latest for completion, so this is not importantly schismatic in the way that, say, the debate over whether gefilte fish should be fried or baked has split on denominational lines.

But to get from the year to an actual day, this is where the concept of pilpul takes root (and for the information, pilpul literally means pepper, and pepper is fine on both baked and fried gefilte fish; a carrot, on the other hand… no, I am not even going to allow myself to start on that one).

And anyway, the Yehudim, the people we now think of as the Jews, used a lunar calendar, as the Arab-Moslem world still does, so who knows what date March 10th might have been, and was it an intercalataory leap year, with the entire month of Adar lived through twice?

What I can say for certain, because the Emperor Titus kept a semi-unofficial diary, and it was called "The Writings of Flavius Josephus", is that the Second Temple in Jerusalem was destroyed on the 9th of Av in the year 70 CE, and that would have been… but they were using the Julian, not the Gregorian calendar, so I can't tell you that precisely either. Probably early August.

Posted by David Prashker No comments: