Large numbers of historic events today, though first I must say Happy Birthday to my sister - in a "personal history" blog, these things matter. 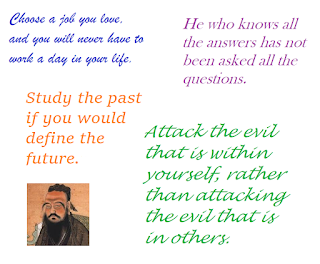 Born today in 551 BCE, the Chinese philosopher Confucius, whose Analects confirm that we have known for two and a half thousand years how to run a decent, civilised society, in which people behave properly towards each other, economies operate morally and ethically so that everyone can benefit, and governments are there to legislate the needs of the demos and not to... but when did human beings ever bother to learn the lessons of history?

Confucius' account of the oriental world and its politics finds sad repetition two thousand years later, in Rustichello da Pisa's transcript of Marco Polo's travels in those lands. In Book 2, Chapter XI, he also tells us "of the festival that is kept throughout the dominions of the Grand Khan on the twenty-eighth of September, being the anniversary of his nativity". The Khan in question being Kublai, about whom Coleridge once set a poem amid the watery caves of Wookey Hole (click here). Polo did not tell Rustichello which year, but historians are generally agreed that it was 1215 (though they also insist on September 23, not 28).

Prosper Mérimée, born today in 1803; tends to be remembered for "Carmen" though actually his pioneering of the novella was far more significant


The Battle of Marathon may have started, or ended, today in 490 BCE; historians are divided only over the date, not the result: Greece beat Persia by about 2.6 miles


No question about the Battle of Salamis, today in 480 BCE. The replay, at sea, because the Persians thought that having a better fleet than the Greeks would make a difference. Chelsea were all at sea in similar manner, last time they came to White Hart Lane.


"Pilgrim's Progress" published, today in 1678, the great Christian novel, and therefore immensely ironic that Bunyan wrote the last parts while in jail, admittedly (in both senses of that word), for offences against the Conventicle Act, which is to say conducting religious services outside the bailiwick of the Church of England. 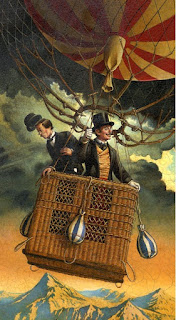 Today in 1924, the first round-the-world flight was completed, ninety-five days slower than Phileas Fogg took in his hot air balloon, so I'm not sure that it really counts. The eight U.S. Army Air Service pilots and mechanics who achieved this also needed four airplanes, where Phileas managed it with just one hot air balloon. They set out from Seattle, Washington on April 6th 1924, covered approximately 27,550 miles, but also needed a ridiculous 74 stops - imagine Virgin Airways or Qantas making 74 stop-overs!


And today in 1902, Emile Edouard Charles Antoine Zola, French novelist - murdered, assassinated, or simply died in bizarre circumstances. Read the detail here; and if it was assassination, the reasons can be found on July 12; other mentions of him here, and here, and here as well.