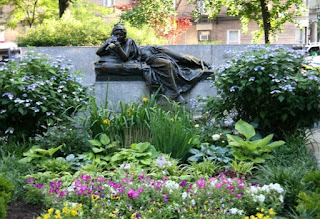 
Another of the vagaries of time that fascinates me is the things that one knows, or encounters, that may be mildly interesting, or even completely uninteresting, at the time, but which acquire an enormous significance later on, especially when history becomes personal. This is not simply the obvious fact that days which become historic started out as days like any other (9-11 for example, only became significant when the first plane struck the first building, at 8:45am), but the way in which future events render past events historic, even though they were not so at the time.

So, hunting for something else in an old diary more than a decade after the event, I came upon this entry from December 23rd 2001, written because it was a Sunday and I wanted to write, but it was the school holidays, and almost Christmas, and the kids wanted to go out and do something, and my wife was nagging me to cook the full roast for lunch; but I wanted a quiet hour of writing first, and knew that an hour was insufficient for focused attention on the novel I was writing at the time; and so I surfed around an on-line almanac to see what might turn up, and it was this:


The Other Straus Family


Minus the second of that double S with which no German Jewish family could ever spell their name, and entirely free of either the schmaltz of the waltz brothers or the Nazi ambivalence of Richard "Zarathustra" Strauss, the "other" Straus family were American Jews of the sort of level of personal achievement to which Jewish culture expects all of its sons and daughters to aspire, but which leads non-Jews by way of jealousy into anti-Semitism.

Three brothers, of whom Isidor was born first, in 1845, Nathan second in 1848, and Oscar last, today, December 23 1850, all three in Otterberg, in Germany. The parents were Lazarus and Sara, and there was a sister too, Hermine, born in 1846. They left Germany for America in 1854, settling in Talbotton in Georgia for a while, where Lazarus established a company importing crockery, china and glassware and manufacturing lamps, in the basement of a small store owned by a man named Rowland Hussey Macy.

Macy had opened four dry goods stores between 1843 and 1855, the original in downtown Haverhill, Massachusetts, in 1851, to serve the employees of the mill industry in the area. All four failed. In 1858, at the suggestion of Lazarus Straus and with his expertise to back him, he established a new store named "R.H. Macy Dry Goods", located at the junction of Sixth Avenue and 14th Street. Lazarus Straus made the move to New York at the same time, advising and financially supporting Macy, but also establishing L Straus and Sons at 44 Warren Street, the sole agent and distributor in the U.S. for Baccarat, Edward Webb, Minton and Wedgwood. By 1885 the company had branch offices in London, Paris, Berlin and Yokohama, Japan.

Isidor and Nathan worked in the family business, growing it until, in 1887, they became sole owners of what was now Macy’s department store in New York, maintaining their family's business as well, but pouring the bulk of their efforts into Macy's because, to be absolutely frank, even without that second S, Straus was too Jewish, and too many people thought that they were making denim jeans.

Isidor became a Congressman and was active in Jewish affairs until his death, on board the Titanic, in 1912 – his death, and the refusal of Ida, his wife, to be separated from him when the lifeboats were launched, became one of the great sentimental scenes in the 1953 movie “Titanic”, as well as “A Night To Remember” in 1958 and the 1997 remake of “Titanic”. The couple are remembered in Straus Park, on Manhattan's Upper West Side, at the intersection of Broadway, West End Avenue, and 106th Street (click here and see the illustration at the top of the page).

Nathan served as New York Park Commissioner from 1889 to 1893, and gave two-thirds of his fortune away to projects in what was then Ottoman Falastina, particularly for the building of hospitals. His son, Americanly named Nathan Junior, was assistant editor at "The Globe", then editor of "Puck", which he published himself, and headed the U.S. Housing Authority from 1937 to 1942. Nathan is also officially remembered in New York, at Straus Square on the Lower East Side (click here), and perhaps more significantly in the Israeli town of Netanya, which was named for him (click here).

Oscar, the third brother, trained as a jurist, was Teddy Roosevelt’s Secretary of Commerce and Labour – the first Jew to gain Cabinet rank in the U.S. – and his country’s envoy to Turkey (a key post in those days of the Ottoman Empire) three times: 1887-9, 1898-1900 and 1909-1910. He was also appointed five times to the International Court of Arbitration in The Hague, founded the American Jewish Committee, and was the first President of the Jewish Historical Society.

Nor was the family a one-generation wonder. Isidor’s son Jesse was the one who built Macy’s into the world’s largest department store, before leaving to become U.S Ambassador to France from 1933 to 1936. Oscar’s son Roger was a member of the U.S. delegation to the U.N. General Assembly in 1954, and founder of the National Conference of Christians and Jews; his son, Roger Junior, founded Farrar-Straus, the publishing house (now Farrar, Straus and Giroux), in 1946 in partnership with John C. Farrar. At the third generation Peter Straus, son of Nathan Junior, founded the Straus Broadcasting Group of radio stations, worked for the International Labour Organisation in Geneva as its executive assistant director, and then in the same capacity ran the U.S. aid programme to Africa in the 1960s.

8 years and a month after I learned these facts, but did no more with them than write them in my diary as something that might perhaps lead somewhere literary some day, 8 years and a month later, divorced and living in Miami, I met a woman on J-Date, who five years later became my fiancée – a great achiever in her own right, as an architect who counts prisons, courts and city halls across America amongst her accomplishments. Nina's great-great-grandparents were Isidor and Ida Straus.


More on the Straus family at http://www.brilliantglass.com/cutting_houses/Carlson_3x.html; and even more at http://www.straushistoricalsociety.org/


Jean Francois Champollion, the man who deciphered the Rosetta Stone, born today in 1790

And today was the day, in 1888, when that sad failed priest turned unwanted artist Vincent Van Gogh, failed even in the act of suicide, because there are no significant veins or arteries behind the ear