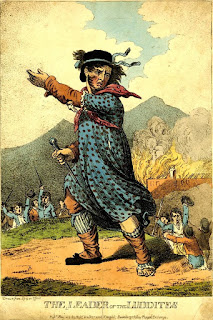 Alongside Guy Fawkes and Robin Hood, Rebecca Riots and Captain Swing, English history is replete with wondrous tales of heroes – who never actually existed. The real Guy Fawkes is revealed on November 5 of this blog, and the truth about Robin Hood will be outed later; Rebecca Riots should really be the Rebecca Riots, an event not a person: protests against poll taxes which took place in Wales between 1839 and 1843 (and see also March 31 and especially June 15: riots against poll taxes are an English tradition!); the Rebeccas were all men dressed as women in the vain hope of going unrecognised by the police.

Captain Swing was a disguise too, a false name in a series of complaining letters, at around the same time as the Rebecca Riots. The complaint was low wages, but it soon extended to the introduction of horse-powered threshing machines, which cost the men their jobs. The riots swept across Kent and Sussex, with more than 600 imprisoned, 500 sentenced to transportation, 19 executed and 9 hanged.

Captain Swing was a Luddite, a term still in use to describe those who are unwilling to accept the replacement of human wage-slavery by robots and computers. The original Ludd was described in an article in "The Nottingham Review" on December 20th 1811, though no historian has yet found any evidence to support its authenticity, and the truth is: it was probably made up. The article described Ludd as a weaver from Anstey, near Leicester, and recounted how, at some time in 1779, as a consequence of being whipped for idleness, or possibly in reaction to being mocked and taunted, he smashed two knitting frames in a "fit of passion". So he entered history.

That same year, in his "History of Nottingham", John Blackner recorded the tale of one Edward Ludnam, who was instructed by his father, a framework-knitter, to "square his needles". Ludnam responded by taking a hammer, and "beat them into a heap". As Blackner reports it, news of the incident spread, and whenever frames were sabotaged, people would jokingly say "Ned Ludd did it" – Blackner fails, however, to explain how Ludnam became Ludd, or indeed why, later on, Ludnam would be remembered as Ludlam, Ludlum and even Nuddlam. All we can say for certain is that the name became as if sewn on, and that, by 1812, frame-breaking had become a form of industrial sabotage so widespread that the term "to strike" derived from it; the organized frame-breakers became known as the Luddites, their letters and proclamations were signed by "Ned Ludd", "Captain Ludd", and even "King Ludd", though there was no actual leader, or not by that name anyway. 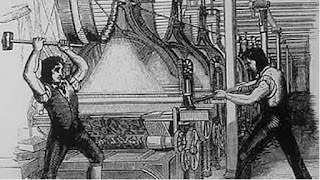 As the legends grew, Ned Ludd quickly became transformed into a latterday Robin Hood, with his rag-and-bobtail army ensconced in Nottingham's Sherwood Forest, and acts of industrial sabotage carried out as far afield (as far afactory would be more accurate) as York. The historian Eric Hobsbawm has wittily described their strategy of machine wrecking as "collective bargaining by riot", though in fact they never rioted, they merely wrecked, until the 1812 Frame-Breaking Act, and the Malicious Damage Act of the same year, made it a capital offense (Lord Byron, in his maiden speech in the House of Lords, defended the rioters and sought, by means of words alone, to sabotage and wreck the bills – he failed). Once the laws were in place, the authorities brought pre-Trades Unionism to a rapid end, employing more soldiers to the purpose than were in the field against Napoleon. Nothing of the sort was seen again in England until Margaret Thatcher took on the miners in the 1980s. 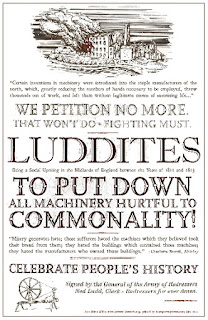 The concept of Ludditism remains alive today, though it is difficult to imagine check-out ladies at Walmart or burger-waitresses at MacDonalds smashing the self-pay tills or the robotic serving arms in protest at the further reduction in their terms of slavery. The simple fact is, that the development of technology at current pace will enable the replacement of human beings in every facet of working life by the end of the 21st century, liberating us from slavery and enabling us to dedicate our time to sport, art and leisure, just as that great visionary Karl Marx predicted!