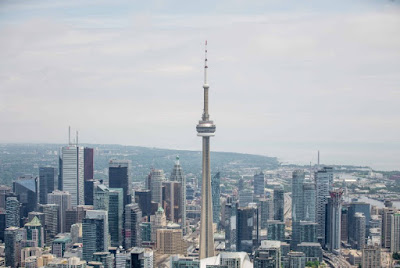 The war of rivalries between nations is such that this page will always be amber, and will always need updating, because it will never be possible to state of any building what I wrote about this one, when I was living there in the first decade of this century:


The Canadian National Tower, known locally by its initials as the CN Tower, the world's tallest free-standing, self-supporting structure, opened today in 1976

A whole 1.5 metres of difference! Wow! But still not enough - because the next one can build higher. Much higher! Fifty-five metres higher!!

Ping An International Finance Centre is a 115-storey megatall skyscraper in Shenzhen, Guangdong. The building was commissioned by Ping An Insurance and designed by the American architectural firm Kohn Pedersen Fox Associates. Height: 599 metres

Could they really not manage that extra metre that would have broken the 600 barrier? Or maybe they were working in feet and inches, and didn't make the calculation. Or maybe they knew about the next one, and their only concern was being two metres above it.

Goldin Finance 117, also known as China 117 Tower, is a skyscraper under construction in Tianjin, China. The tower is expected to be 597 m with 117 stories


Stories? As in telling non-kosher, non-hallal porkie pies about how high you are? I think you mean storeys (see April 21)

And as to that 600 metre landmark - sorry, airmark - it had already been beaten anyway:


I am glad they got that spelling right. The alternative, like Grenfell Tower - height 67 metres - would have been "flaws".

But what is a mere 601 metres, when the engineering ingenuity of Humankind is at stake?

The Shanghai Tower is a 632-metre, 128-story megatall skyscraper in Lujiazui, Pudong, Shanghai. It also has the world's highest observation deck within a building or structure, and the world's fastest elevators at a top speed of 20.5 metres per second.

And then there is:

2,717 ft - doesn't that make it sound so much even higher. I wonder what that would be in Biblical cubits.

And I missed the Tokyo Skytree (634 metres), and the Canton Tower (a mere 604 metres), and the Abraj Al Bait Towers in Mecca (601 metres), and soon there will be the Jeddah Tower, "previously known as Kingdom Tower and Mile-High Tower, and planned to be the world's first 1 km high building". Yes indeed - 1,008 metres. Or no indeed, actually, because this one too is going to stick a metal pin into the air, and claim the world record by doing so. Architecture on steroids. Engineering by ball-tampering and spot-fixing. The top floor will be a mere 668 metres. Cheats!

And not an American building anywhere in the top 15 (Freedom Tower in New York is a paltry, a dwarfish 564 metres, and the top 20 of that is embroidery)!


But all of these are just pathetic modern attempts, by primitive people with limited capacity. The tallest building ever remains the one that the Babylonians put up, almost four thousand years ago, and it was so high, way beyond measurement in feet or metres, even without radio aerials, that its summit touched the very gates of Heaven.