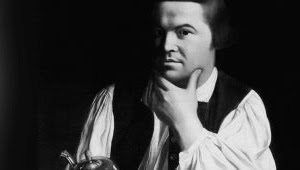 "Listen, my children, and you shall hear
Of the midnight ride of Paul Revere.
On the eighteenth of April in Seventy-Five
Hardly a man is now alive
Who remembers that famous day and year.”

I remember Longfellow's poem as I remember Kipling's "If", and Browning's "Pied Piper", and Robert Service's "Sam McGee" and "Dan McGrew" - as my father's poetry, the stuff he loved. Or verse really. Stories that rhymed, moving along in formal (sometimes rather turgidly) symmetrical rhythms: the 19th century's equivalents of "Beowulf"; the roots of Dylan's early ballads; the tedium of Poe's Raven ("Once upon a midnight dreary, while I pondered, weak and weary..."). Because I knew no American history, I thought the Longfellow was a British tale, perhaps from the Crimea like Tennyson's "Light Brigade", or maybe Napoleonic. "Ready to ride and spread the alarm, Through every Middlesex village and farm" may have been the source of my error, for I was myself living in Middlesex, though I now know it was a different one. Or it could have been the reference to the "Somersett, British man of war".

How authentic is Longfellow's account? The events at Concord and Lexington are historic enough, though it is odd that he makes no mention - not even by the subtle use of metaphor, which would have been easy - of Revere's career as a goldsmith and copperplate printer, his somewhat dormouse involvement in the Boston Tea Party, his membership of a secret society whose self-appointed task was to keep a watch on the British (an early version of the CIA perhaps?). All of which, in today's parlance, would have made him a terrorist, or a patriot. Longfellow clearly intends the latter.

So who was this man who "bore the news of an impending British invasion to the town of Lexington, Massachusetts, a hotbed of radical activity", as history.com describes him? And first, why Lexington, and what message, and why were they coming and.... I shall do my best to remain neutral.

The date was April 18th 1775. Trouble had been brewing for four years now, especially since the British heated the pot by passing the Tea Act on May 10th 1773, and the so-called "Sons of Liberty" ("so-called" is an expression used by the media to discredit anyone they disagree with), had boarded three ships in Boston harbour and wasted three hundred and forty-two chests of perfectly good and entirely innocent tea by throwing it overboard.

That was on December 16th, 1773. The following year the Brits strained matters even more by adding the "Coercive Acts", also known as the "Intolerable Acts", though correctly known as "The Boston Port Act" (March 31st 1774), "The Massachusetts Bay Regulating Act" (May 20th 1774), "The Administration of Justice Act" (May 20th 1774), "The Quartering Act" (June 2nd 1774), and, if you are a Canadian and sympathise with the Americans on this issue, "The Quebec Act" (June 16th 1774) as well. Acts of infusion, you might say. Certainly the fuse was lit, though for the moment the pot was still simmering. The situation in "the Colonies" was... well, let's just say that it needed sober people to sit down, preferably over a quiet cup of tea...


"The Massachusetts Bay Regulating Act" had given the British government "at home" powers over the Colonies that amounted to martial law (the way the Spanish government dealt with Catalunian secession in 2017 is worth comparing). The elected Assembly was replaced by a council nominated by the Governor (General Thomas Gage), who was himself granted executive power to appoint and dismiss all law officers. Town Meetings were prohibited, unless royal assent had been obtained first. The election of juries by the freeholders was suspended, and, under the terms of "The Administration of Justice Act", known locally as "The Murder Act", trials that might arouse controversy could be moved to another colony; which might be paraphrased into "trials where the death penalty was a predictable certainty could be hidden away somewhere, and no one would find out where until the man was gallowed". In response, the "Patriot" leaders established their own government - illegally of course - and began training militias - the source of a later clause in the American Constitution - for armed conflict.

Surprisingly, it was none of these that caused the pot to spill over, though it definitely simmered at around boiling-point. It took "The Quartering Act" of 1774 to do that; the Act required that four newly-arrived regiments, temporarily stationed at Castle William, were to be quartered in empty houses, inns and barns, and then in private houses if insufficient accommodation could be found. And not the British government but the colonists themselves were required to pay for it, plus fire, candles, vinegar, salt, bedding, cooking utensils, up to five pints of small beer or cider or half a pint of rum mixed with two pints of water, per man, per day (no tea; very wise in the circumstances). No self-respecting Yankee was gonna pay one gol'darned cent to... you can fill in the rest of that cartoon reaction for yourself. Insurrection was inevitable. On April 18th British troops marched out of Boston, instructed to confiscate the American arsenal at Concord, and to arrest Samuel Adams and John Hancock, the leaders of the "Sons of Liberty", who were known to be "hiding" at Lexington. Not very far behind them, two other Bostonians, Paul Revere and the much-forgotten William Dawes (Longfellow doesn't even mention, let alone name him), set out to warn Adams and Hancock, and to rouse the Minutemen. 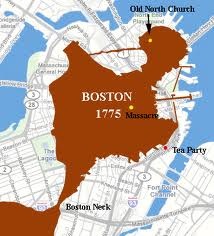 Revere and Dawes went by different routes, reckoning there was a risk that one of them might be captured, but a better chance of getting through if they went separately. Dawes headed south, through the Boston Neck peninsula to Shawmut and Roxbury; Revere went due west, the Harvard-MIT route, crossing the Charles River to Charlestown by boat. Fellow patriots in Charlestown had been told that a signal would come from Boston, hung in the steeple of the Old North Church which was the highest point of the city: one lantern if the British were taking the Boston Neck route, two lanterns if they were crossing the Charles River to Cambridge. There were no other ways to leave the city. Longfellow's poem, like history, remembers Revere and overlooks Dawes, only because two lanterns were hung.

Yet the contribution of Dawes was just as significant, because the revolutionary government didn't really need the information - they knew perfectly well that it was coming. What Revere and Dawes really undertook was the rousing of the militias, village by village, town by town, as both rode to Lexington. Hundreds of them, trained and ready to confront the British troops en route.

Revere also gets the credit because he got there first, though only just, and in fact they went together to update Adams and Hancock, before setting out, again together, to update the folks at Concord. Somewhere along the way, a third Patriot met up with them and joined them, one Samuel Prescott.

At dawn of April 19th, a British patrol arrested Revere. Dawes escaped, but minus his horse, and no chance of getting to Concord on foot so he went back to Lexington. Prescott escaped too, and still with his horse, so that he was the one who made it to Concord and let them know the British were on their way. And in the meanwhile, deciding that response to sudden gunfire was more urgent than continuing to beat up Mr Revere, the British let their prisoner go.

Very early dawn indeed, that gunfire. Seven hundred troops sent by the régime in London (régime is an expression used by the media to discredit any governing body that they disapprove of) under Major John Pitcairn arrived at Lexington to find a rebel militia under Captain John Parker waiting for them (seventy-seven men with muskets actually, but "rebel militia" makes a much better headline). Pitcairn ordered the Patriots to disperse, and after a moment's hesitation, but recognising the scale to which they were out-numbered, the rebels-terrorists-freedomfighters began to leave. When somebody, quite possibly by accident while trying to close the shooting mechanism, or maybe someone disgusted to see his comrades turning tail, or somebody heroically stupid who wanted to die a martyr's death, somebody, unknown to this day who, but somebody fired "the shot heard around the world" (the line actually belongs to Ralph Waldo Emerson's 1836 "Hymn", written for the dedication of the memorial to the later Battle of Concord), and a very thin cloud of musket smoke, something like the steam you get from a teapot freshly filled, soon covered the village green. It became known as the Battle of Lexington, which may be hyperbole. When it ended, about four minutes after it started, eight Americans were dead and ten were wounded; the British had one minor casualty. Nonetheless, the American Revolution had begun.

1902, the first country to adopt fingerprinting did so today, and somewhat surprisingly (though I don't know why this should be surprising) it was Denmark

1906, and just as the Zoning Authorities (the Town Planning Authorities would be the name in most countries) had failed to warn, when the Gold Rushers didn't bring their plans to build a major city on the fault-line of a tectonic plate, the San Francisco earth quaked. It actually does so with unalarming regularity, as I discovered when I lived there; mostly there's a distant rumble underground, like a Bart train going through the East Bay tunnel at Oakland, and the bed or the sofa or the desk-chair shakes, then wobbles, and then life goes on (except for architects, whose California license has special requirements for earthquake expertise, just as Florida architects have special requirements for hurricanes, and Grenfell Tower architects have special requirements for fire-cladding). But this one rumbled for a full 47 seconds, and then the ground opened, 700 people were killed, 250,000 made homeless - and nobody resigned. The quake measured between 7.9 and 8.3 on the Richter Scale, depending on how close you were to the epicentre

1946, League of Nations dissolved - no longer needed (see January 10); the United Nations was being formed, that "forlorn and hapless Horatius, trying in vain to defend civilisation against the barbarians", as I seem to recall writing somewhere, years ago

1949, Ireland declared itself an independent nation (minus six provinces in the north; that little matter is still pending)

1955, the term "Third World" was first used (well, in English maybe; it was actually coined three years earlier, on August 14th 1952, by the French economist Alfred Sauvy, in an article in L'Observateur. "Tiers Monde" was the term he used. You might also like to look up Chairman Mao's writings about what he called "The Three Worlds", which pre-date Sauvy, and define the triplet differently.