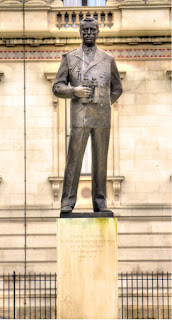 Sir Peter Hall, the Artistic Director of the National Theatre in London at the time this happened, wrote in his diary for today in 1979:

"Dreadful news today. The IRA have murdered Lord Mountbatten, his grandson, and, it is suspected, some of his family. They were all on holiday off Ireland in a fishing-boat which was blown up. The papers speak of radio-controlled lobster-pots. I feel sick."

Roy Jenkins, former Labour Chancellor but at this time President of the European Commission, recorded the event in his diary somewhat differently:

"Bess [Church] gave me the shattering news of Mountbatten's assassination in Ireland. I had last seen him at the Euro Gala at Drury Lane in May, after fifteen years quite close official association with him, not only over the prison enquiry in 1996, but also over various aviation matters before that; and indeed there had been a certain continuing relationship with him in Brussels. Dreadful though it is, I suppose that, from his point of view it is not too bad as he had begun to give the impression of not knowing what to do with the rest of his life, and might even have welcomed a dramatic death, although not one with these wide-effects. He was a pretty remarkable man on the whole, not a great intellect but with exceptional drive and power to pull or push people along with him..."

The Hall is simply what you write when these things happen. The Jenkins is extraordinary: an act of vanity followed by a statement of the most callous uncompassion. Based on the Jenkins one would have to imagine Mountbatten's own diary entry for the night before as:

"Bored and listless. Might as well find a way to die heroically. Roy who?"

But there is also the expression "wide-effects", which may just be a typing error for "side-effects", but makes for an interesting neologism anyway, and leads directly to a question much-asked around the world: do we leave up, or do we take down, the statues of those whom we no longer regard as heroes? And if so, whose should we take down? (see my story "The Statue" in "The Captive Bride")

Mountbatten makes for a good exemplar. We keep him up, self-evidently, because we hold our royal family in deep respect - or at least our internal propaganda is always pro-royal even when the heroes are palpably not heroic. On the other hand, he was the last official representative of British imperialism and colonialism, which we now recognise as a terrible historical error (for those who were subjected to it; a fantastic success, let's be honest, for those back in GB whose world-best economy was built on it). But there is a third dimension: that we leave Mountbatten's statue up, but change the plaque to make him a symbolic reminder of all who have been victims of terrorism?

If we are going to make the decision to take down statues for ideological reasons, it would be useful to have a list of what there is; the one linked here is incomplete (and London-centric, just to make that pointless ideological point as well, ironically), and only includes those maintained by English Heritage (not British Heritage, you will note - another pointless ideological point I feel the need to make, for the benefit of those who take English rather than British History and Literature at GCSE and A level). But it is a list, and those who wish to start with Cecil Rhodes will need a lot of sledgehammers before they get to him. 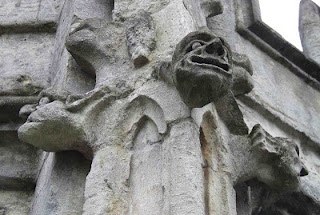 And then, once we have removed the statues, can we go into the libraries and galleries and museums and start removing the no-longer-acceptable books

(some good ideas here and here)

and paintings, and musical recordings too?

And don't forget the gargoyles (properly called grotesques) on the facia of the churches (if there any left after Cromwell's Puritans had a smashing time back in the 1650s).

And definitely - and you can figure out why for yourself - definitely start by taking down all statues to the German poet Heinrich Heine (oh, alright, click here)


Two of the world's most important philosophers share a birthday:


I am inclined to suggest that Confucius has more to offer a contemporary thinker, and will explore that theme when the light changes to green.