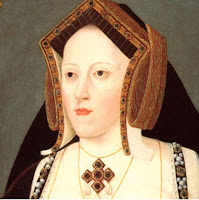 Catherine of Aragon, born today, in 1485. She died, supposedly of cancer of the heart, at precisely 2pm on January 7th 1536, at Kimbolton Castle in Cambridgeshire, and was buried in Durham Cathedral. Why there? By what connection? After her divorce she lived in Bedfordshire, then Huntingdon. Am I missing something? Am I wrong to assume that Durham was well out of the way, and that this is precisely where English History, like King Henry, prefers to keep her?

Hers is a tale worth telling from a "Captive Bride" perspective - history through the "other" lens: Esau rather than Jacob; Judas rather than Peter; the victim rather than the victor - indeed, she could serve as the hidden eponym! Why, even the portraits of her - fat, dour, plain, black-clad, nunly-Catholic in the one most history books prefer (top right); simply dour and plain, lightly black and Puritan in the other most commonly found (below, left). 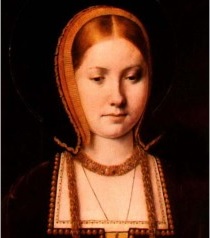 A young woman of virtue and royal birth, sold into marriage for political purposes, widowed within a year and still not seventeen, pressed into a Levirate marriage with a boy of eleven, made to wait seven years before betrothal became consummation, bereaved of four out of five children in just eight years, cuckolded, annulled, declared incestuous, and finally removed to the austerity of her religious devotion.

Yet it is always Henry's story that is told, and somehow she comes across, not as a justifiable object of our pity, but as that black-clad, bible-bashing, barren harridan, severe and Catholic, somehow deserving of her fate. As if she personally bears the blame for all the several hundred years of Protestant-Catholic enmity. As though it were Catherine, and not Luther, Calvin, Zwingli; Catherine and not Henry, Wolsey, Cromwell. As though at any point from birth to death she had the faintest touch, even of her smallest finger let alone a hand, upon her destiny. As though Henry were Mr-Nice-Guy who never did a woman wrong, or any man either, all his fat and syphillitically monomaniacal existence.

Are you assuming, as I did at first, that the third picture (below, centre) must be a PR photo from some modern movie, with an actress playing Katherina (Katherina please, not Catherine)? No, this was the portrait they sent to young Prince Arthur, so he would recognise his beautiful Spanish princess when she arrived from Aragon in 1501 (they had been betrothed by then for twelve years, aged just three and two respectively at the time, and she now 16, he 15.) 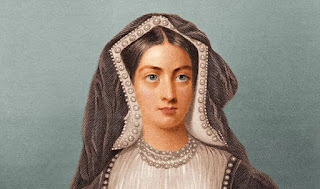 
Ludwig Van Beethoven, composer, born today in 1770 - though I much prefer the note about him on December 12


The Boston Tea Party, comprising between 30 and 60 patriots and some 342 chests of tea, over-boiled, over-brewed and overboard, today in 1773 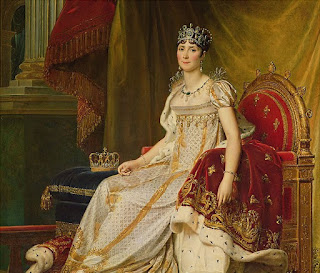 And as an additional note, and only because her tale is one of yet another "captive bride", Napoléon divorced the Empress Joséphine, today in 1809 - not that her name was Joséphine, but Napoleon was a fantasist in everything, and Joséphine was the name he had fantasised for his perfect woman, which of course she turned out not to be.

Marie Josèphe Rose Tascher de la Pagerie, when she grew up among minor aristocracy on Martinique, and known as Marie, and sometimes as Rose, but never until His Soon To Be Imperial Majesté turned up as Josèphe let alone as Joséphine.

They married in a registry office rather than a church, which would provide Napoléon with an easy escape-route later on: the official who conducted the ceremony had no authority to do so, the officer who witnessed Napoléon's signature was a minor, the bride lied on her signed document that she was 29 when she was actually 33, and Napoléon provided a false address as well as over-stating his age.

Clearly it was all about sex, and no sooner had he gone off to become Alexander the Great than she was looking for opportunities to become the Maquis de Sade's Justine. But she was also good at making important contacts that aided his career, and so he agreed, because the Pope insisted, and literally on the day before he was crowned Emperor of France, to formalise the marriage in a Roman Catholic ceremony.

That was in 1804, and for the next five years, just like Henry VIII's good lady, she was unable to provide him with a child. When he got one of his many mistresses, the Countess Walewska, pregnant, he knew the problem lay with her, not him, and that was that. The marriage was annulled, Joséphine retired to Malmaison, just outside Paris, where she spent the rest of her ex-husband's life partying as lavishly as she could, at his expense, and cultivating roses. She died on May 29th 1814. Napoléon may be excused for not attending her funeral - he was on board ship, sailing into exile on the island of Elba at the time, and was not informed of her passing until he disembarked on May 30th