Death of Abba Eban, the man who talked the United Nations into voting for Israel in 1947, and who famously said that:

"History teaches us that men and nations behave wisely only when they have exhausted all other alternatives."


The Stanford Encyclopedia of Philosophy [Ô1] has a long and very thorough article on Pierre Bayle, but it failed to answer the question that had brought me to its web-version: I was seeking links and ancestries for Stendhal, in the hope of including him in my Pseudonyms page (click here). Stendhal was also a Bayle, though he spelled it Beyle, but Google offered me alternatives, and here I was. 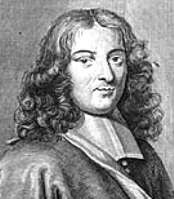 I had never heard of Pierre Bayle (1647–1706) - in the world of the encyclopaedia an entry is always both its name and its birth-and-death dates - a Huguenot, which is to say a French Protestant, "who spent almost the whole of his productive life as a refugee in Holland". A life of the sort that is always guaranteed to draw my interest and postpone my project for that day to another; a life, that is to say "devoted entirely to scholarship". Stanford is one of America's more serious universities, so when their professors tell you that "his erudition was second to none in his, or perhaps any, period", you wonder what you have been doing in your own scholarship these past several decades, that has enabled you to miss him.

"Although much of what he wrote was embedded in technical religious issues, for a century he was one the most widely read philosophers. In particular, his Dictionnaire historique et critique was among the most popular works of the eighteenth century."

But then even the learned professors become inarticulate - or do I mean "disarticulate"? [Ô2]


"The content of this huge and strange, yet fascinating work is difficult to describe: history, literary criticism, theology, obscenity, in addition to philosophical treatments of toleration, the problem of evil, epistemological questions, and much more."

Maybe one day someone will write exactly that about my BibleNet, my Book of Days - but please, if you cut and paste from the Stanford, delete the inapplicable word "obscenity" (and put in a comma after "work"). [Ô3]

"His influence on the Enlightenment was, whether intended or not, largely subversive."

Yes, cut and paste that, exactly as it is written. But first, please, let it be true.

"Said Voltaire: 'the greatest master of the art of reasoning that ever wrote, Bayle, great and wise, all systems overthrows.'"

Bayle, with an "a" not an "e"! I had been hoping that maybe it was another of those American spellings, and that someone of his own time who made reference to him would... but no. Bayle with an "a". Still, even if he was not one of Stendhal's ancestors, we have to believe - but then, because we are following Bayle, we also have to question that belief, disavow it, re-avow it, and then hypothesise a better explanation - that he was most definitely a precursor. 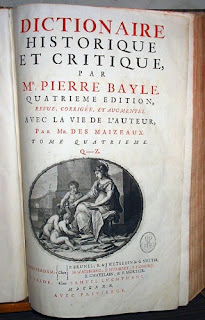 And clearly one of my precursors too, perhaps even a precarnation. I am amused as I read that Stanford essay by the desperate contortions the writer goes through, trying to pin down a man whose very nature, whose very philosophy, defies such pinning, a man who did not write philosophy because he was a philosopher, or history because he was a historian, but who wrote what he felt like writing because he felt like writing it, and because that is the ultimate definition of a philosopher, "one who loves wisdom"; even though wisdom, if you are Bayle, or Beyle, is ultimately unfindable.

"It is not a dictionary in the usual sense; rather it is a hodge-podge encyclopedia of intellectual curiosities, serious argument on a variety of topics, salacious stories, exacting textual scholarship, and much more that drew a readership hardly less diverse than its contents. To be sure, its entries are alphabetically arranged, but perhaps ninety-five percent of the work is to be found in the footnotes, called Ôremarks, that often bear little relation to the main text. Readers obviously dipped here and there into this massive work of over six million words, and had a wonderful time."


I must remember that term, for what I generally call "sleeve notes" or "semiotics", on the walls of the Art Gallery, in the footers of several novels, adjacent to my poems and songs. Ôremarks. [Ô4]

As noted above, most of his intellectual life was passed in Holland, where the other great philosopher of the city, Baruch Spinoza, was born in 1632. Spinoza had already received his cherem when Bayle was still just nine years old (click here), and died when Beyle was only twenty, living at that time in Le Carla (now Le Carla-Bayle), a small town in the foothills of the Pyrenees; but it is inconceivable that he was unaware of his illustrious predecessor, or influenced by him [Ô5]. While Voltaire, Rousseau, Diderot, the other great French thinkers of the Enlightenment, all come after Bayle and quite probably derived from him.


What I think I am probably going to admire most about Bayle is what I suspect that I sometimes admire most about Kazantzakis (click here), though I do need to think further, and read more, before being absolutely uncertain: the willingness to embrace every idea that people he respected thought valuable, until he had seen through them, and could move on to the next one, journeying like Moses through the intellectual desert, aware that he was in constant zigzag, that he was charting by sand-dunes that could blow away or turn to quicksand at any moment, and that the sight of an oasis on the horizon was probably a mirage.

So he began life as the son of a Huguenot curé, in a community devastated by the Renunciation of the Edict of Nantes; then took himself to a Jesuit college before renouncing that too in favour of... Calvinism in Geneva... Huguenot Protestantism back in France... at one point Pyrhhonic skepticism (click here), at others ... "a positivist, an atheist, a deist, a skeptic, a fideist, a Socinian, a liberal Calvinist, a conservative Calvinist, a libertine, a Judaizing Christian, a Judeo-Christian, or even a secret Jew, a Manichean, an existentialist ... "

"The philosophical basis for his argument against Catholic persecution appeared the following year in the Commentaire philosophique, a classic in the literature on toleration." 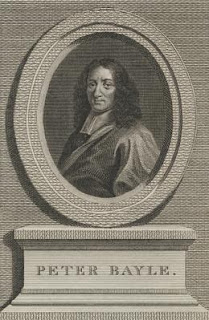 And editor of "Nouvelles de la République des Lettres", one of the very first learned journals in human history.

"Bayle, whose health had never been robust, died on 28 December 1706, probably of a heart attack precipitated by tuberculosis. He was putting the final touches to his 'Entretiens de Maxime et de Thémiste', the work which motivated Leibniz to write the only book he would ever publish, the 'Theodicy'."


[Ô1] These are not footnotes, these are imitation Ôremarks. This first one is simply an opportunity to be subversive by protesting the Americanised (as opposed to Americanized) spelling of what should be encyclopaedia (the ae is known as a digraph in some encyclopaediae [the ae at the end of encyclopediae is, however, not a digraph, but a Latin feminine plural], but should be known as a diaeresis - sorry, diaresis)

[Ô2] I suspect that Bayle would not have made a clever-clever pun of this sort anyway, but that, if he had, it would have been as a footnote, rather than within the text

[Ô4] Since my intention was to look up Stendhal, let me note that his birthname was Marie-Henri Beyle, that he was born in Grenoble, which is in France not Switzerland, on January 23rd 1783, that he died in Paris on March 23rd 1842, that he is best known for the novels "Le Rouge et le Noir" and "La Chartreuse de Parme", and that no one seems to have a fucking clue (one obscenity, in a piece about Bayle, is surely both necessary and forgivable), why he took Stendhal for his pen-name. [Ô4a]

[Ô4a] Can footnotes have footnotes? Can Ôremarks have Ôremarks? According to an email received since publishing this, from a woman claiming to be called Bayle Stanford, there is a town in Germany named Stendal, in Saxony-Anhalt, in Germany, the capital of Stendal District and the unofficial capital of the Altmark region; and that Marie-Henri worked there for a while between 1806 and 1810. I simply wish to note, in response, that said town is actually named Hansestadt Stendal, and that it is spelled without an "h". [Ô4a(a)]

[4a(a)] My essay on Stendhal's Syndrome, an imaginary disease invented by the false shamans of the cult of psychology, will be available in my next incarnation. In the meanwhile, an article on the subject (here) probably isn't worth the reading for the psychology, though it is quite illuminating for the art. [Ô4a(a){i}]

[5] My thanks to Marie Henri for her information that a translation of several fragments of Bayle's writings, by one Richard Popkins (I believe that's his real name), is available through Amazon.com (click here), and that it includes a piece about Spinoza. 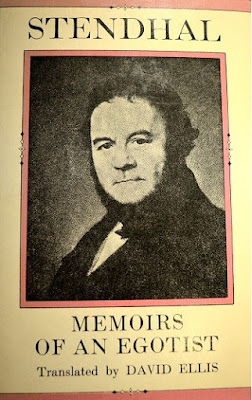 "The Sayings of the Philosophers", published today, in England, in 1477