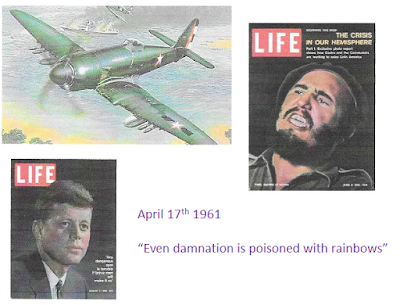 My diary for August 5th 2002 finds me in St Malo, in northern Brittany, en route home from a family holiday that has taken us all over Celtic western France, from Quimper to Carnac, from the paintings of Max Jacob to the megalithic remains of King Gradlon - all of it preparatory material for my novel "The Land Beside The Sea", though it was also just our annual family vacation. That evening, our last before the ferry took us home, we walked the ramparts, and ate outdoors beneath a tree so full of starlings that conversation was virtually impossible. Alongside the tourist shops there were street stalls everywhere, an urban car-boot sale reflecting an alarming penury beneath the shiny gloss - one of them two teenage girls with just a dozen secondhand paperbacks and some unwanted teddy bears, as if they were selling off the contents of their attic to earn pocket-money. Ever an eye for a bargain, I spotted the cover of an old vinyl record leaning against the leg of a trestle: "A Concert At The White House, November 13th 1961. Pablo Casals..." The woman obviously thought it was a piece of junk, outcast amongst the anachronisms in the CD world, and asked 3 Euros for it; then looked aghast when I explained to Hannah what it was - a relique of Camelot, John F. Kennedy's concerts for liberty in the face of Kruschev. If she had charged 300 Euros it would have been a fairer price. Three evenings later, home at last, unpacked, the kids in bed, I finally got around to playing it. "Wonderful" was the word I chose for my diary, "as music even before its status as historical curiosity." 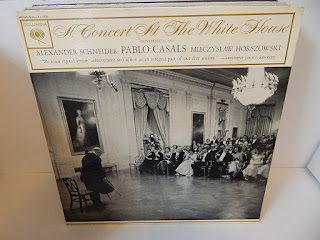 But very much a historical curiosity. The sleeve notes include some of the exchange of letters between the great cellist and what was probably a Presidential secretary rather than the President himself, though no doubt he signed the missives: Kennedy's invitation first, and then Casals' letter of acceptance. High-flown rhetoric in the cause of freedom.

"Never before has humanity faced such crucial moments, and the desire for universal peace is the prayer of all."

Hyperbole, and yet. It was a little under two years since Castro had ousted Batista, and already sanctions were in place following the execution of his political opponents, the nationalisation of US banks and properties, worth around a billion dollars, and all the major oil companies too - worth a good deal more. In January 1961 diplomatic relations had been severed, and on April 17th some 1400 Cuban exiles had gone back, with CIA support, to launch a counter-coup across the Bay of Pigs. Two weeks later Kruschev awarded Castro the Lenin Prize in honour of his defeat, as the Russians saw it, of Kennedy and American Capitalism. May saw the first plane to be hijacked to Cuba and Castro's abolition of democracy, and in response JFK announced America's intent to put a man on the moon within ten years, as well as making hijacking a capital offense. 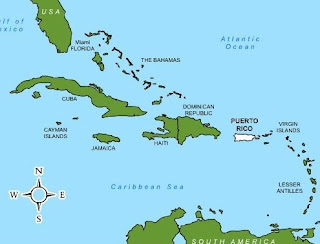 This then was the context, and inviting Casals was not simply an artistic decision; Casals was living in Puerto Rico, the performance was at an official dinner for the Governor of Puerto Rico Luis Muñoz Marin, and it does not require an A level in geography to see the logistics of that quarter of the Caribean, with Batista living in exile on Dominica. Casals' epistolary remarks about world peace came in the wider context of his having written an oratorio, "El Pesebre" ("The Manger") in 1960, which he had been conducting all around the world "to promote world peace". Alas, he did not perform it at the White House that November evening. 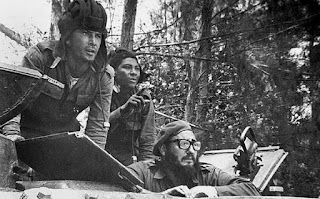 INVASION at Bay of Pigs


You can listen to the full concert here, with the 85-year-old Casals accompanied on piano by Mieczyslaw Horszowski and on violin for the first piece by Alexander Schneider. The playlist is Mendelssohn's Trio in D minor for Piano, Violin and Cello Opus 29; Couperin's Concert Pieces for Cello and Piano; Schumann's Adagio and Allegro for Cello and Piano in A flat, Opus 70; and a set of Catalan folk songs, arranged by Casals for cello and piano, and entitled "Song of the Birds".

Mariner 9 became the first spacecraft (from Earth; who can say if other intelligent life-forms haven't been touring the cosmos for billennia?) to orbit Mars, today in 1971