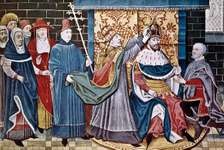 Today in 742, the birthdate of Charlemagne, King of the Franks and the Lombards, though some historians insist that the day is correct, but not the year - 743 the antagonist. Crowned as Holy Roman Emperor by Pope Leo III on December 25th 800.


Uncertainty about this date too: Giovanni Casanova, Italian adventurer and lover, born, most likely today, and definitely in 1725. Giovanni Casanova... a splendidly Romantic sounding name, don't you think, perfect for a Byronesque life of ceaseless womanising. In Italian anyway. In English it would translate into the very dull John Newhouse, no good for Byron, no good for Dickens, we can hadly imagine him interesting Jane Eyre or any of the Bennet sisters...

And how would it translate into French? Jean de Nouvelle-Maison might make it work for Victor Hugo - imagine him on the barricades with Jean Valjean, demanding brand-new homes for every working man and woman. And definitely a candidate for one of Emile Zola's Rougon-Macquart novels - Zola was born today in 1840: Emile Edouard Charles Antoine Zola, to give him his full due... but I have mentions of him, and a longer piece about Hugo, elsewhere - click here, and here, and here, and here as well.


Speaking of brigandry and other forms of immoral behaviour, the rape of the Americas was rather more Oldcastle than Newhouse, or Vieja Castilia in the Spanish.

Today, in 1513, Florida was discovered by Juan Ponce de Leon (that man of Casteel, dare I mispronounce him?). 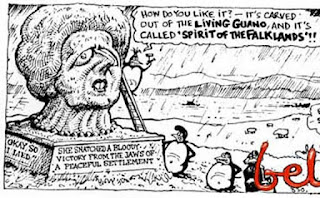 And finally, though it reflects the same epoch of illegal conquest, today in 1982 troops from Argentina stormed Las Malvinas - I am putting it on this date, rather than going for "April 26, 1982: Argentine troops surrendered to the British on the Falkland Islands", because I feel rather more loyalty to Morality than I do to Great Britain... and the truth is, like the Elgin Marbles and Gibraltar and Northern Ireland and a great deal more of the old empire, this should have been handed back to its rightful owners, and with reparations, decades ago, without needing a war to try to achieve it...