The death of René Descartes. Or should we say that he did not die, but merely ceased thinking? (And such a shame the world only seems to remember the second half of that most profound aphorism; the first half is actually far more important, because doubt is the necessary starting-point of wisdom). 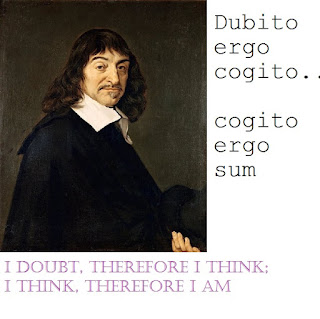 
Bruckners 9th Symphony, which the sleeve-notes on my Naxos recording tell me (rather terrifyingly) "languishes in a purgatory of misunderstanding, false interpretation, appropriation, even barbaric mishandling, having long fallen 'prey to taste'" - that last a quotation from the great German critic (may I call him a neo-Cartesian?) Theodor Adorno. 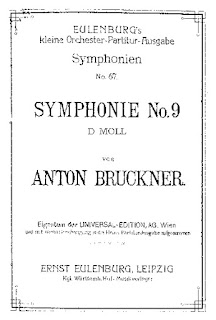 In fact, I am playing a different version (Bruno Walter conducting the Columbia Symphony Orchestra) as I write this, and having to check the dates, because surely there is some kind of an error here, and what I am actually listening to is a previously unknown symphony by Mahler.

But no - merely a monumental influence. Bruckner failed to complete his 9th between its starting-date in November 1887, and the day of his death, on October 11th 1896; it was written as a break from his 8th Symphony, with which he had wrestled for six years and still couldn't pin the angel down. Mahler was serving his apprenticeship as a young conductor in those years - Prague, Leipzig, Budapest, Hamburg - becoming conductor of the Vienna State Opera only in 1897, the year after death aborted Bruckner's unfinished creation - he left behind no less than seventy-five draft scores, each of them different from the last, and that just for the Finale.

The first performance was today, February 11th 1903, in Vienna, under the baton of Ferdinand Löwe, who hated it so much - or was simply overwhelmed by some of its unprecedenteds - that he completely re-orchestrated the first three movements, and only reluctantly included the Te Dium, though by all accounts the way I've incorrectly spelled it is the way he incorrectly played it. It was then left out of the first published version, despite Bruckner's clearly stated intention that it belonged at the conclusion of the symphony; and the debate on that topic continues to this day, some performances including it, others hating its Dm-Cmajor clash so much they cannot bring themselves to play it, and this despite the fact that there are clear prefigurations earlier in the text.


Mahler was in Vienna from 1897 until 1907, and I can't believe that he and Alma were hosting a dinner party on the evening of February 11th, and therefore missed the great event. On the other hand, given his own love and pursuit of the radical, and given that his status meant that he could pick and choose what he wished to conduct, how come he didn't conduct the première himself, and why would he allow such an important event to be undermined by a conductor who clearly didn't understand the piece, didn't like the piece, and made a complete hash of performing it? My only thought on this is that Mahler was undertaking his own musical experiments at the time, and wanted to distance himself from Bruckner's, perhaps to avoid comparison, perhaps simply to avoid excessive influence (for an artist of his seriousness, the latter is the more significant). His own Fourth was composed between June 1899 and April 1901, and he conducted its first performance himself on November 25th 1901, well away from Vienna too, in Munich. Immediately afterwards, he started work on his Fifth Symphony, again taking the baton for its first performance, again doing so away from Vienna, in Cologne this time, on October 18th 1904.

But even if he didn't conduct the première, he must surely have heard it, if only because he was working in the building while the rehearsals were in progress. I am no expert in this field, but as I sit here listening to the Bruckner, I hear structures, time-forms, architecture, melodies and motifs, instrumentation, all of it reminiscent of the Wagnerian and yet not, all of it seemingly prefiguring Mahler; and I am wondering if there wasn't, in Mahler's not conducting the première, something of that "9th symphony phobia" that several of the great post-Beethoven composers also had. 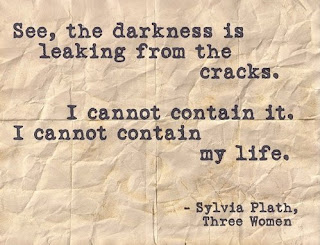 
Sylvia Plath's suicide in 1963 - the gas-jet, apparently, is also poetry (see also November 17, and click here for my piece on her poem "The Rival")

Start of the Vietnam war in 1965; but I much prefer writing about the ends of wars, and I have already done so for this one, the unconditional surrender by South Vietnam to North Vietnam, on January 27 1975.


And then maybe use the remaining space to speak about one of the most important moments in reeent history, the proof that Truth and Reconciliation can be done, and peacefully, and then move forward; the great learning-moment for all of us, and what a shame that didn't manage to include Jacob Zuma: the official freeing from prison (in truth he was already released, from Robben Island anyway, in order to engage in negotiations with the De Klerk government from a proper residence on the mainland), of Nelson Mandela, freed, at 4:14 local time, today in 1990 (see also August 4, the date of his arrest).