Two pieces on this date, which or may not be connected (E.M Forster was convinced that everything connected, eventually!); the first in 1946, the second rather more difficult to date: 106 BCE is the official date, but he would have known it as 648 AUC (Ab Urbe Condita - the date of the founding of the city), or possibly as the Year of the Consulship of Caepio and Serranus, whoever they were*. Of course, the date could just as well be 1345, the year in which Petrarch "discovered" the Cicero letters...


*(Quintus Servilius Caepio the Elder was a rather dubious military commander in Gaul who ended up on trial for literally losing the army, and accused of plundering for personal gain most of the booty captured in the Gallic wars; Gaius Atilius Serranus was a plebeian who made it to the upper ranks, but then became embroiled in the nastinesses of a civil war and murdered for his arrogance) 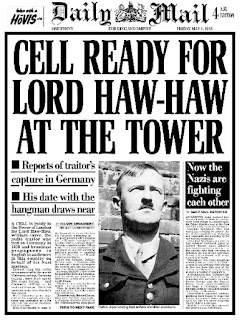 William Joyce, Lord Haw-Haw, may have presented himself as the most passionately patriotic of Britons, but the truth, so often absent in Joyce’s life, is that even this was another lie. Joyce was born in Brooklyn, New York, in 1906, to Irish parents, and brought up in Ireland, though in those days Ireland was still British. He was sixteen when he first set foot on the mainland, and when he was granted a passport it was because he fraudulently claimed to have been born in Galway. In 1933 he joined Oswald Mosley’s British Union of Fascists. An electrifying orator with film star looks, his credibility as a Hitler-henchman seems to have owed much to a scimitar-shaped scar on his right cheek, curving from the point of the ear-lobe to the groin of the lips. Perhaps because all despots fear rivals, perhaps because Mosley was too liberal, too left-wing for his taste, Joyce left the BUF in 1937 to form his own congress of übermenschnikim, the British National Socialist Party, a chimera and a contradiction of terms if ever there was one.

As war loomed ever more unappeasably, Joyce crossed the Styx to settle among his fellow-monsters. Beginning in September 1939, Radio Hamburg broadcast in a sneering, false, upper class accent, prologued with the derisibly mis-pronounced “Chairman He Calling” (the intention was “Germany Calling”: Joyce’s ultimate hubris, as though he and the eternal Reich had symbiosed), a torrent of threats and insults against the very land whose citizenship he claimed and which he had previously purported to revere. The daily onslaughts were Goebbelaisian; Joyce acquired the sobriquet “Lord Haw-Haw”, though no one in all honesty was laughing.

British troops liberating Flensburg captured him, brought him back to England, put him on trial in September 1945. Joyce’s defense in court was simply to declare the trial illegal on the grounds that he was American, not British, and so could not be accused of treason – the rare event of a half-truth in Joyce’s life, albeit one that cancelled out a previous lie, and was itself cancelled by a third. His British passport, even if given in error, had still been given. Valid till July 1940, it covered nine months of Chairman He’s callings. On January 3rd 1946, William Joyce was convicted at the Old Bailey, and hanged. For those opposed to the death penalty in any circumstances, I proffer Lord Haw-Haw as the case for the rope.

And why should we remember him today? At this time of Bradley Manning* and Edward Snowden, when the term “traitor to one’s country” is being employed so carelessly, Lord Haw-Haw reminds us that a traitor is a man who joins the enemy, and knowingly fights against one’s former side. A man with a conscience about the morality of his own side’s actions may be a critic, or a whistleblower, but in a democracy one can be a member of the opposition while firmly committed to one’s place on the inside.

You can listen to his very last broadcast at http://www.eyewitnesstohistory.com/vohawhaw.htm

* this piece was written in September 2014, long before Bradley Manning became Chelsea, and longer before she was released from a captivity she should never had to suffer in the first place. 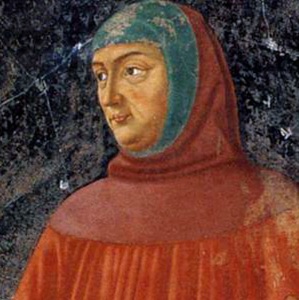 A good moment to note that today is Cicero's birthday, Marcus Tullius Cicero, or Tully as he was apparently known - I wonder if that splendid BBC India correspondent Mark Tully was knowingly named with this in mind; whereas our old pet cat was not: in her case the pronunciation was different, the u as in bull and not as in dull, which Cicero certainly was not.

No, indeed. Any list of his achievements will include philosopher, politician, lawyer, orator, political theorist, consul, and constitutionalist, while his literary skills and style made him the outstanding prose writer of the Roman era and an enormous influence on the Italians of future generations, which was why both Dante, and his "good friend" Petrarch even more (pictured right), hallowed him as we in England hallow Shakespeare, though perhaps Sir Thomas More would be a closer comparable.

In writing The World Hourglass I attempted to appraise the development of human civilisation over the epoch since we left the caves and started living in communities, a period of about twelve thousand years in which we have made enormous scientific and technological progress, with positive economic benefits for those who are lucky enough to have them, but virtually no progress whatsoever in the rather more important field of human behaviour; the truth is, there are, today, proportionately as many corrupt politicians, raped women, trafficked prostitutes, violent husbands, bullying bosses, cheating athletes, violent criminals, lying retailers and evil drug pushers et cetera as ever there have been.

And yet, as long ago as Hammurabi (circa 1800 BCE) and Moses (circa 1300 BCE), as long ago as Confucius (circa 500 BCE), as long ago as Plato and Socrates and Aristotle (circa 400 BCE), our greatest thinkers had worked out what the values and principles and ethics were that we needed to implement in order to make a decent human society, leaving it up to the politicians to work out, if I may paraphrase Jean-Claude Juncker, the current President of the European Commission, how to implement it and still get re-elected. They have not yet found a way, though we can place Cicero on the list of those who sincerely tried.

Petrarch spent many years tracking down Roman manuscripts from the crumbling ruins of a long-destroyed empire; he had already come upon Cicero's "Pro Archia" in 1333, but it was the discovery of a volume of Cicero's letters, known as "Ad Atticum", in Verona in 1345, which marked one of the beginning-points of the Italian Renaissance, and set the tone of literature in Europe for the next six hundred years. Four words in particular stand out in those letters, and become the mandala of European intellectual thought, if only in the non-religious world, though some parts of the religious world are slowly catching up today: Humanitas, Qualitas, Quantitas and Essentia. I make my anti-religious comment only because I have a deep suspicion that, had Rome not regressed to paganism by adopting Christianity, we might be living in a Ciceronian as well as a Petrarchan world today, and much the better for it.


Curious irony that J.R.R. Tolkien, who re-wrote as "The Lord of the Rings" the same ancient Germanic saga that Wagner re-wrote as "The Ring of the Nibelungen", with its evil Haw-Haw Sauron and the Ciceronically rather better world of Hobbit-town, should have been born today, in 1892


Today in 1521, Martin Luther was excommunicated by the Diet of Worms, though actually all they were doing was informing him that Pope Leo X had issued the papal bull Decet Romanum pontificem that morning