St Joseph's Day is the reason for the public holiday across the sea in Eireland. Here amongst the barbaroi it seems to have gone unnoticed that, today in 1944 – which if you stop to think about it was an extraordinary date for such an event to have taken place – Sir Michael Tippett's glorious (I use the term advisedly, conscious of its musical connotation) "A Child Of Our Time" was given its first performance, at the Adelphi Theatre in London. I am listening to it as I write, Andre Previn's 1968 recording with the Royal Philharmonic Orchestra, and reading about Herschel Grynspan, the 17 year old Polish Jew who triggered Krystallnacht on November 7th 1938 by shooting dead the German diplomat in Paris, Ernst von Rath. The incident was the "stimulus" for Tippett's Oratorio, just as the title was taken from another victim of the Nazis, the Hungarian Odon von Horvath, whose novel "Ein Kind unserer Zeit" was also published in November 1938. I am slightly shocked to learn that Tippett asked T.S. Eliot to write the libretto; rather glad that Eliot declined – on the grounds that it would be "too obviously poetic" (the arrogant xxxx!). Too overtly anti-Semitic could be nearer the mark. What would be the best key to set "Bleistein with a fat cigar" I wonder? Something decidedly sharp, inexorably. 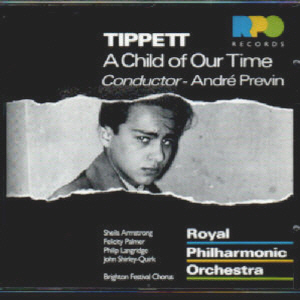 The cover of Previn's recording shows a young man who could very easily win an Elvis Presley look-alike competition, but is in fact the only known photograph of Herschel Grynspan - though probably the Nazis took a few for their archives, after capturing him when they captured France and taking him home for torture. He may have died at Sachsenhausen, according to one report, unless he was executed in 1940, as per another, or still alive and well into the late 1950s and working as a garage mechanic, if you prefer to credit the third legend (yes, Wikipedia, how did you guess?).

By coincidence, last weekend, my local library was having one of its regular clear-out sales, which gave me the four Tippett piano sonatas for just 20 pence. Recorded, thanks to an anonymous donation, in the Unitarian Chapel on Rosslyn Hill in Hampstead in 1984 and early 1985 by Paul Crossley. 20 pence – and they were pleased to get rid of it. 20 pence more than Vincent van Gogh ever earned for his paintings, and about what Mozart had left in his purse the day he died.