A perfect illustration of "The Immaculate Failure" ("The Captive Bride", page 160), from Captain Scott’s diary, this day in 1912:

"It is wonderful to think that two long marches would land us at the Pole. We left our depot today with nine days’ provisions, so that it ought to be a certain thing now, and the only appalling possibility is the sight of the Norwegian flag forestalling ours. Little Bowers continues his indefatigable efforts to get good sights, and it is wonderful how he works them up in his sleeping-bag in our congested tent. (Minimum for night -27.5o) Only 27 miles from the Pole. We ought to do it now."

They did, arriving two days later, on the 17th, only to discover that the Norwegian flag had indeed forestalled their own, borne there just ahead of them by Roald Amundsen. Scott and his four comrades died on the way back, from a combination of exhaustion, starvation and extreme cold.

More on this tale on March 17, and a hint of it in Shackleton's tale on January 5. 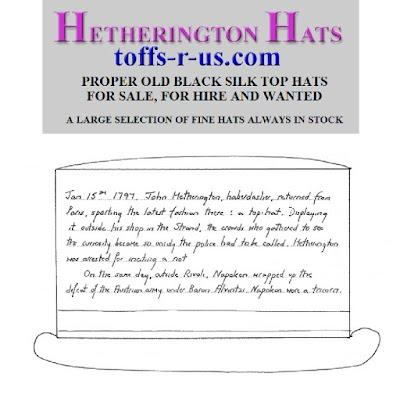 John Hetherington, haberdasher, returned from Paris this morning, sporting the latest fashion there: a top-hat. Displaying it outside his shop in the Strand, the crowds who gathered to see the curiosity became so unruly the police had to be called. Hetherington was arrested for inciting a riot.

On the same day, outside Rivoli, Napoleon wrapped up the defeat of the Austrian army under Baron Alvintzi. Napoleon wore a tricorn.


Osip Mandelstam, born today in 1891 - merely a note here, no need for a follow-up. For more, see "Poem No 395" and "For Osip Mandelstam", both in my "Private Collection"; and also several references in this blog - perhaps the most historically interesting is Yevtushenko's comment, for which see July 18.


Alan Lomax, chronicler of the American folk-song, born today in 1915.


And MLK, Martin Luther King, born today in 1929, but the date of his assassination (April 4) is where you will (eventually) find my piece about him.