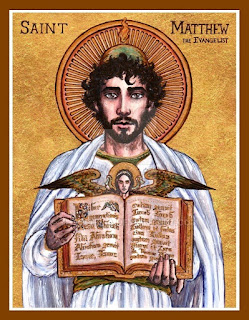 
Matthew was one of the original twelve disciples, a Jew, though he demonstrates remarkably limited knowledge of Judaism, a tax collector - we must never overlook authorial context where books acquire historical significance. The first of the four Canonical Gospels is attributed to him, though there is also a second work that bears his name, written around the 7th century CE, and variously named "The Gospel of Pseudo-Matthew", "The Infancy Gospel of Matthew", and even "The Book About the Origin of the Blessed Mary and the Childhood of the Saviour".

The Canonical Gospel is the one that he quite possibly did write, though whether the absence of his name from any point of the text proves authorship, or disproves it, is a matter for the theologians. It claims to have been written for the Jews, somewhere between 50 and 100 CE, to tell them that the Messiah had come - a writing which would not, of course, have been necessary, had it actually been true - and to demonstrate that all the Biblical prophecies had been fulfilled: yes, all of them, even the contradictory ones. The version of the legend given virtually imitates Mark - which is odd, given that Mark was not a disciple and therefore wrote without personal experience; we would expect it to be the other way around - except for some ten parables and a handful of incidents mentioned nowhere else.

Matthew concentrates on Jesus' preaching and teaching - most of which would have reflected bread-and-butter Pharisaic Judaism to the Jews of his generation - and shows his powers of healing, particularly during his time in Galilee. He tells what is essentially a local religious squabble of little cosmic significance, between the authoritarian Jewish Temple establishment and a popular faith-healer-cum-Rabbi who challenges some, though only some, conventional beliefs and practices; and most of those challenges are precisely the ones that Rabbi Hillel had made a generation earlier, and which would be incorporated into Talmudic Judaism just a generation later, because of Hillel, not because of Jesus, who actually quotes Hillel repeatedly.

Throughout Matthew, Jesus is portrayed as a rebelliously traditional Jew of humanist persuasion, well-versed in scripture, but outraged by both the hypocrisy of the Pharisees and the misplaced nostalgia of the Sadducees. He calls on men to keep God's commandments, but offers his own Mishnah upon them. A miracle-worker on the side of the poor and the oppressed, but essentially non-political in the broader, Roman sense, he saw himself as the heir of Moses and Elijah, but no Essene and certainly no Zealot. In today's parlance, a committed Reform Jew. It is hard to see from Matthew's account why either the Jews or the Romans would have wished to crucify him, though it is just as hard to fathom why any Jew or Roman would have wished to follow him either.

While there are strong elements of Zoroastrianism, and of eschatology, in his teachings, he is essentially a rather soppy altruist and humanitarian, who would probably smoke pot and support the Green party if he were alive today, and spend his time protecting whales by praying for them at inter-faith tea parties. No revolutionary out to change the world.

No mention, either, of Mary Magdalene, of Lazarus and Martha, of the Second Mary; and not surprisingly, as they are all parts of the Tammuz myth, locused in Beit Anatot (Bethany) that would be amalgamated later, after the collapse of Temple Judaism and the final conquest of Israel allowed the secret Adonis and Tammuz worshippers to come out of hiding after centuries of prohibition and persecution. Of the disciples, not Matthew himself, but Peter, James and John held pride of place.

Fuller secular commentary on all the Canonical and other Gospels, as well as on the first seven books of the Hebrew Bible, can be found at TheBibleNet, the most thorough collection of non-faith materials relating to the Bible ever assembled, rooted in Comparative Mythology, the ancient languages of the Middle East, and archaeology. 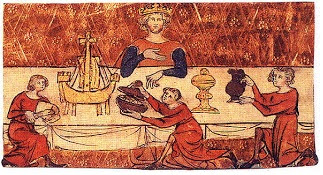 Today is also international homophobes' day (actually, sadly, every day is international homophobes' day; but this has special status) – interesting too, with reference to my page for September 8, that Richard the Lion-Heart's homosexuality is either ignored or contested by the historians; but perhaps that was because he lived so far from England that nobody at the time even knew.

Of Edward II they certainly knew. His murder – technically his regicide – today in 1327, took place in a dungeon at Berkeley Castle (the rear wall at Berkeley Castle is ornamented to this day with the most splendiferous arboretum of climbing vines; and adjacent to the castle a veritable museum of living moths). The king was just forty-three, and should have been looking forward to a long reign, but after the defeat at Bannockburn in 1314 his demise was inevitable, and homophobia added a convenient excuse; what is surprising it that took almost thirteen years.

People remember the gruesomeness of the final death, but not the failed steps that preceded it. At Corfe Castle he was starved, but stubbornly refused to fade away. At Berkeley they chose a dungeon that was already half-flooded by an open drain, but he declined to contract a fatal illness and resisted hypothermia. In the end his jailers, Gurney and Maltravers, chose sadism for reasons that almost certainly went far beyond their wish to kill the king in favour of his fifteen year old first-born. Using a horn as a funnel, they shoved a red hot poker into his rectum, so that presumably he died of shock. 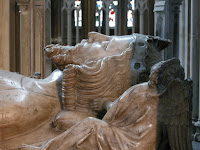 As a sequel to the story, the boy Edward who succeeded his father built him a magnificent tomb, something like a wedding cake made out of stone icicles, which you can still visit at Gloucester cathedral. Meanwhile his mother, Queen Isabella, was despatched to a nunnery, and her lover Roger Mortimer to the scaffold, the price of their plotting the murder of the king. Served the buggers right, if I may mis-apply a phrase!


Herbert George Wells, arrived from the future and the past simultaneously, today in 1866


Gustav Holst, the best music teacher they ever had at St Paul's Girls' School, born today in 1874


Sir Allen Lane, the man who penguinned the paperback, born today in 1902 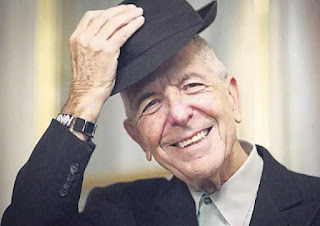 And today in 1934, the longing for love and light found a crack that let it into the universe, and stayed for more than eighty years, in the form of Leonard Cohen