Lady Jane Grey, "queen for a day", though actually it was nine days, and they never got around to crowning her, so "acting queen for nine days", which isn't anything like so mnemonical.

Her father was Henry Grey, 1st Duke of Suffolk, 3rd Marquess of Dorset; whence her last name. But she was really Lady Jane Dudley, because they also married her off young for political reasons, and because Dudley wanted his son Guildford to be king! The poor girl was only sixteen when she found herself at the centre of the Catholic-Protestant feud in the wake of King Edward VI's death, and some people were prepared to do anything to prevent a Catholic, and even more than that a woman of any faith, from becoming the next monarch. Edward had felt the same, which is why he named Jane as his successor. But Mary wasn't having any of it, and today in 1533 Jane was deposed in a coup d'état that set Mary on the throne.

Apparently none of this was Jane's idea, and she had the good grace to feint when it was suggested to her; presumably, intelligent young woman that she was (she had studied Latin, Greek and Hebrew, and was fluent in French and Italian), she recognised the absurdity and futility of her father's plot, and previsioned the axe that would chop her head off less than nine months later.

Sir John Dudley, the man who orchestrated most of this, was the Earl of Northumberland, the father of Jane's husband Guuildford, and also of Robert Dudley, later the Earl of Leicester who was Shakespeare's acting patron, and whose best friend in childhood, most of which he spent imprisoned in the Tower under Mary, was Elizabeth Tudor - I wonder if Bess' memory of Lady Jane Grey was in her head when it came to snuffing out Mary Queen of Scots later on?

Jane's execution took place on February 12th 1554, on Tower Green, the nineteen year old Guildford having had his head removed on Tower Hill a few moments earlier; the pair are buried in unmarked graves at St Peter Ad Vincula Royal Chapel, on the north side of the Tower.

In London's Guildhall you can see Delaroche's study for his study of that execution; the final version is in the National Gallery and I can't tell any difference between the two... the study is at the top of the page, the final version below. 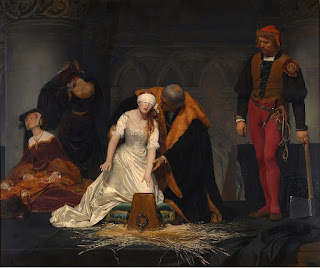 Construction of the Kremlin started, today in 1485

The Franco-Prussian war began, today in 1870

And today in 1969, John Fairfax finished rowing across the Atlantic ocean, at the same moment that Teddy Kennedy reached the pinnacle of his own wave, in that same ocean, drowning Mary Jo Kopechne in its waters off Chappaquiddick Island.