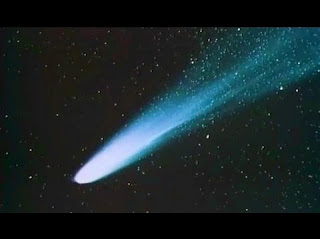 Edmund Halley, he of the comet, appeared for the first time today in 1656. The comet itself made its most recent appearance on Februaty 9th 1986; the comet orbits the sun (the technical term is a "perihelion") once every 75-and-a-bit years, a statistic confirmable from sightings in 1758, 1835, 1910, and 1986. The next sighting is predicted for 28th July 2061, however, predictions about movements of heavenly objects belong in the realm of astrology, not astronomy, and so it cannot be regarded as scientifically sound.
Halley did not create or invent the comet, he merely witnessed it, and found his name attached. The earliest known sighting was in China, in 240 BCE, after which there is a reference in a Babylonian tablet of 164 BCE. You can find a complete list of sightings here, and watch a video here


Wilhelm Conrad Roentgen discovered X-rays, today in 1895, no doubt a vital tool for Dr Christian Neethling Barnard, the man who invented heart transplant surgery, born today in 1922 - but see December 3 for that.


The Museum of Modern Art in New York opened today, in 1929


Rubin "Hurricane" Carter's conviction for a triple-murder in 1966 overturned, today in 1985 - but they could never "give him back the time he's done" (click here for Dylan live in 1975).