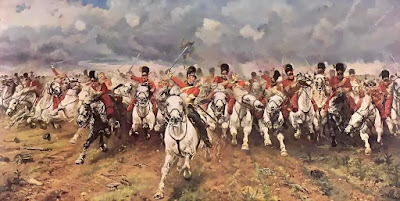 
Of all the many coincidences in the world, few are more enjoyably amusing than this one, if only because they provide so many opportunities for witty writing and human satire, which may or may not be the same thing:

Today in 1415, the Battle of Agincourt, in which the English under Henry V defeated the French during the Hundred Years War

Today in 1854, the Charge of the Light Brigade, in which the Russians defeated the English during the Crimean War

And why the coincidence, besides the date? If you were a French poet, writing the tale of Agincourt from a French perspective, might you be inclined to describe that disorderly mad dash through a muddy field, and in the still pouring rain, towards a line of English lances protected by a second rain of arrows, as... "la charge de la brigade légère". You can read Tennyson's poem here


John Steinbeck awarded the Nobel Prize in Literature, today in 1962


And today in 1971, the United Nations General Assembly formally removed Taiwan and admitted mainland China, confirming what a biased, controlled, meaningless organisation it is, with barely half the countries in the world members, and the entire farce managed by the permanent members of the Security Council, all of whom use their veto as and when it suits them...


... or their troops, despite their commitment to that most fundamental clause of the UN treaty, which states that member countries will do everything in their power to avoid wars, even to the point of committing themselves to not making bellicose threats... you can read it for yourself here; and then go tell President Trump... too late to tell President Reagan, who was responsible for...


US troops invaded Grenada, today in 1983 - see October 19 - 2,000 marines and paratroopers attacking an island barely populated enough to conscript an international cricket team: The Charge of the Heavy Brigade, oh yes indeed! And you can tell - even UK Prime Minister Thatcher refused to take part, calling it a "humiliation" of the island.