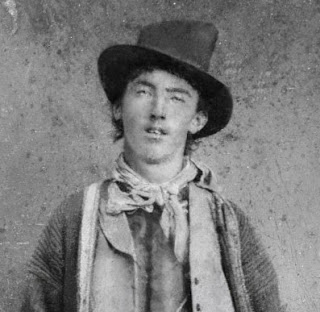 
Day - I've lost count! - of the road-trip from Florida to California, which was actually from Miami to Lafayette in the East Bay of San Francisco, but the book is going to add the extensions, so that it can start at the very south-eastern tip of America, at Key West, and end where California was first beached, by Francis Drake, at Bodego Bay.

We are driving through Brownwood and Abilene and Sweetwater and Lubbock - Texas' state capital - following the ring road towards Fort Sumner, where I have to stop, even though it's the "wrong" Fort Sumner. The other one, in Charleston, South Carolina, I already wrote about in one of the pieces in "Travels In Familiar Lands", the spot where the American Civil War began; but this one is just over the border inside New Mexico, the place where Navajo and Mescalero Apache were interned from 1863 to 1868, the period of the Civil War, though that was probably just a pretext.

The place, also, where William Henry McCarty Jr died, on July 14th 1881, the date on which this account really belongs, except that page is already very full.

William Henry McCarty Jr? Am I supposed to have heard of him?

You are, and have, but not under this name - outlaws, like writers (the two are not always all that different) take pseudonyms. He was born, today in 1859, in the Irish slums of New York City, and William Henry McCarty Jr was the name his parents gave him. A teenage thief, the member of a gang that franchised violence where others franchised sex, drugs and alcohol, sometimes aliasing as Henry Antrim, at others as William H. Bonney, he got involved in the Lincoln County War in Arizona, killed a disputed number of other killers, of which Sherriff Brady was the one that got him captured and sentenced to death. He killed two guards and escaped with a bounty on his back, and fled to where we are now, Fort Sumner in New Mexico.

The town - to digress for a moment - was named after the former New Mexico military governor Edwin Vose Sumner, but the federal government closed the fort in 1868, selling all its buildings to a prominent New Mexico landowner named Lucien Maxwell in 1870. Maxwell's son Pete became one of Henry-William's non-bandit friends, and it was in his house that Pat Garrett enabled the man he called Billy the Kid to knock on heaven's door. Both the Kid and Lucien Maxwell are buried in the old military cemetery in Fort Sumner, an irony which Dylan did not manage to get into his song. 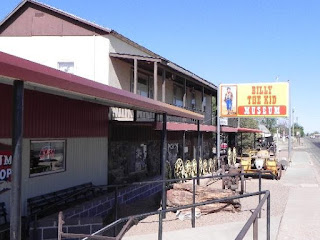 Today the knocking on heaven's door is mostly done by air balloons; Fort Sumner is the location for the Columbia Scientific Balloon Facility, a NASA enterprise responsible for providing launch, tracking and control, airspace coordination, telemetry and command systems, and recovery services for unmanned high-altitude balloons. We drank Coke and ate pizza at the Billy the Kid Diner next to the Museum - a steal, at half the price.


The Grand Duchy of Luxembourg separated from The Netherlands, today in 1890... like me, I'll bet that you supposed that it was previously French, or maybe Swiss, not Dutch... this needs a map, because between the two is Belgium... apparently (I just looked it up), Belgium didn't have a separate existence until 1830, being "the Low Countries" before that, as opposed to the Nether Lands, or the Hoch (High) Lands, which of course is Holland... and no negative impact on The Netherlands, or anybody else, economically, socially, politically, militarily. Bodes well for Catalonia, Brittany, Euskada (the Basque lands), Wales, Scotland, Irish reunification, Brexit...


Much less complex, to read let alone to explain, "Life" magazine hit the newsstands, today in 1936


And today in 1948, the Zoom lens was patented by somebody named F.G. Back.