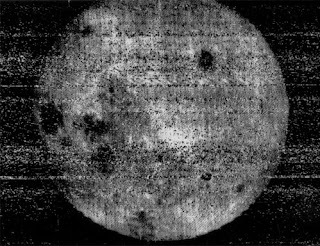 
Thomas Keneally, Australian novelist, born today in 1935 - see my essay on his "Schindler's Ark" in "Travels In Familiar Lands"


And today in 1783, Freedom was granted to slaves who fought during the Revolutionary War: no medical insurance, no voting rights, no political representation, few jobs outside the tea plantations and the cotton mills, no access to whites-only golf and country clubs, little opportunity for schooling... but still, you have to start somewhere, and this was Freedom.


1949: Foundation of the German Democratic Republic, which is to say the DDR, the Deutsche Demokratische Republik, East Germany, Ostdeutschland, as opposed to the Federal Republic of Germany, which was the western half, and properly the Bundesrepublik Deutschland. Nationalism revived and resurrected, because it had proven such a clever idea in the first place.

And today in 1959, Luna 3 sent back to Earth the first photographic images of the Moon's farside - the launch is on the previous page; but I am confused. Seven years later, on April 3 1966, Luna 10 became the first spacecraft to orbit the moon. How did Luna 3 manage to photograph its backside (the same view that Moses had of God, four thousand years previously) without also oribiting it, which I understand to mean "going all the way around it"? Answers in easy English please, in the Comments box at the foot of the page. And while you're answering: the moon rotates on its own axis, no? Once every twenty-seven days. So there isn't really a farside of the moon, only the bit that happens to be round the back at the time that you are looking; so if they had waited another fortnight the nearside would have become the farside, and they could have photographed it from the front. Am I missing something? 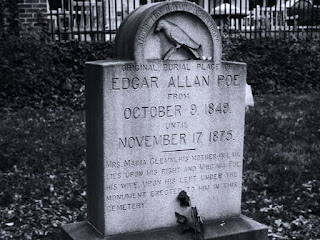 Edgar Allen Poe died today in 1849. Click here to get "A Peep Behind The Scenes" in "Private Collection", which includes an account of that death, drunk and self-drugged in a gutter in Baltimore, while his wedding-party was out searching for him. When the body of an anonymous tramp, or possibly some homeless guy, was found by the police, they arranged his burial in an unmarked grave... the utterly, darkly, fantastically bizarre (and therefore characteristically Poesque) story of what happened next can be read here