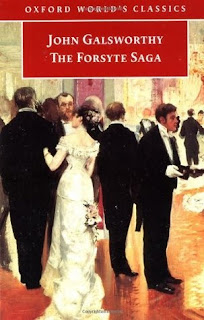 
John Galsworthy, novelist, born today in 1867, and sadly set aside by most English curriculum-setters, literary critics, even would-be-writers looking for significant influences. "The Forsyte Saga" may not be "A La Recherche du Temps Perdu", but it's probably as close as an English writer, obstacled as he is by all those factors that make him English, is ever likely to get to it.

I must find the DHL essay on Galsworthy, so that I can quote his opening paragraph, which is the clearest summary of "what is criticism" that anybody ever wrote [1]. And then talk about the 1960s TV series, which completely put me off the book as a young man; until decades later one of my daughters read it, and talked about it with such enthusiasm that I downloaded it to Kindle and realised I had missed out on one of the truly great English novels of the first half of the 20th century. Soames is horrible, and the rape is dreadful; Young Jolyon, the artist brother, is splendid, and the portrait of Victorian-Edwardian England, Europe indeed, covering every aspect of human life and the human condition, without the depth of insight of Proust, without the lyrical prose-poetry of Proust, but very much in that league of endeavour. Maybe I should be putting this in Private Collection, rather than here. 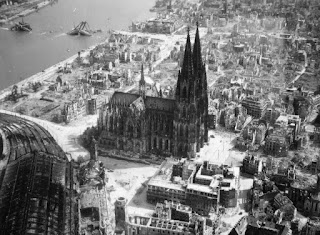 Today in 1880, Cologne Cathedral, the largest Gothic church in northern Europe, was completed... dead on schedule too, no delays, just as the architects and builders promised when they started the work - on August 15th 1248. Churchill was less successful in keeping his promise, which was to destroy as much of Germany as he could: fourteen direct hits on the Cathedral, and it turned out the church was indeed built upon a rock. Nor was the failure to flatten it surprising, given the quality of the allied equipment. "It took 108 B-17 bombers, crewed by 1,080 airmen, dropping 648 bombs, to guarantee a 96 per cent chance of getting just two hits inside a 400 by 500 feet area", according to one pilot (click here)


And what would we be speaking across Europe if Churchill hadn't managed even that much flattening?

Don't mock, that's how you say it in Esperanto (according to Googletranslate anyway; and who am I to argue with the fuehrers of the googlereich?) - though it looks and sounds remarkably like Dutch to me, or even Double-Dutch, albeit that its inventor was Polish. "First Esperanto convention, today in  1910" in case you hadn't worked it out for yourself. And this de derde keer, the 3rd time, that Esperanto has or will come up in this almanac (see July 26, and December 15).

But what point Esperanto anyway (maar welk punt Esperanto hoe dan ook)? Is the aspiration now (at last, denke al-Lah) dead? We have to hope so, but probably not; there is always an element of humanity that wants to reduce the infinite variety that makes our world so interesting and curiosity-inspiring to everyone living in the same country, under the same despot, using the same currency, wearing the same clothes, thinking the same thoughts, holding the same beliefs and opinions, buying the same goods, and speaking the same language... boring enough to yearn for global warming and a dinosauric end.

[1] “Literary criticism can be no more than a reasoned account of the feeling produced upon the critic by the book he is criticising... the touchstone is emotion, not reason. We judge a work of art by its effect on our sincere and vital emotion, and nothing else.”