Czar Ivan IV, "Ivan the Terrible", of Russia, born today in 1530. What do you have to do to acquire such a sobriquet? I suspect that I may end up moving this to another date, since clearly merely being born doesn't provide an explanation.


Leonard Bernstein, composer and conductor, born today in 1918; at times he could be Leonard the Terrible - the pop-tunes of "On The Town" and "West Side Story", the schmaltzy sentimentality of "Kaddish" and "Jeremiah". But the"Chichester Psalms". But the conducting of Mahler. Writers and artists never die, they are simply re-evaluated by posterity.


And then, more death-dates, of which the first is of little interest, though if he was what the almanac says, then good riddance.


Frans Hals died, as everyone must, eventually, though whether it was today, or tomorrow, the 26th, or three days later than that, depends entirely on which encyclopedia you take your facts from. And anyway, it's the life that matters, the tracks in the sand that you left behind, and if I am putting up the stop sign on his, it is partly because of the year, 1666, which was regarded as the Devil's number, and so no surprise that London was hit by plagues of rats the year before, and plagues of fire that year, and plagues of continuing superstition in every year since; and partly because...

...today, in 1900, the still existent deity noted in his diary that

On August 25, 1900
shortly before his 56th birthday
Friedrich Nietzsche succumbed
to pneumonia apparently
in combination with a stroke
His body was transported to the family gravesite
directly beside the church in Röcken bei Lützen
where his mother and sister now also rest 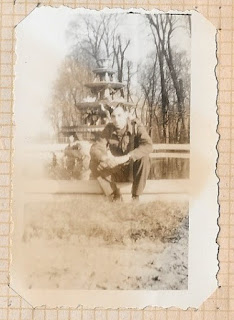 (the original of this can be found in my collected poems, "Welcome To My World" - click here)


Allied forces liberated Paris, today in 1944. The illustration is from my dad's personal photograph album, taken about five weeks later, on the steps of the fountain in the back garden at Versailles


Voyager 2 made its closest approach to Saturn, today in 1981.