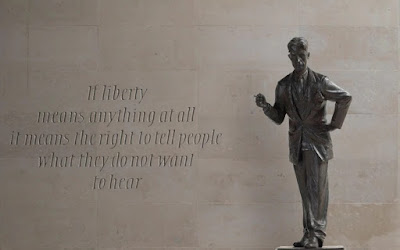 The statue in the illustration rather epitimoses for me the British attitude to freedom of speech, summable up as "you have the right to say absolutely anything you want, provided that it is on the approved list; say anything else and the public will feel free to ostracise you, excommunicate you, force you to apologise, and otherwise revile you."

But it isn't only that. It's the location of the statue, out at the back of the Portman Place building, under the concrete walkway where the delivery vehicles park, and the dustcarts come to clear away the rubbish. I came upon it quite by chance, cutting through the back of the BBC to get from Russell Square to Baker Street without having to deal with crowds and traffic.

Andrew Marr, who is a BBC man to his kilt and tam o'shanter, reckons that Orwell would have "sneered and spat" on the statue, and has some interesting things to say about the Ministry of Truth in "1984" being based on Orwell's negative experience of working for Auntie Beeb. His piece also contains several more of the best quotes from Orwell, of which my own favourites are below.

And it isn't only all of that either. The statue shows a rather Chaplinesque Orwell hovering by the back wall, cigarette in hand, but just far enough from the "No Smoking" signs to be legal, and sloganed on the wall beside him is precisely the argument against the catechism and doxology of political correctness that I have satirically summarised above; but it struck me that it is also the reason why old flat-head (that's Plato to you non-Greconerds) wanted to exclude the poets from the republic, and why bad teachers need the excuse of ADHD. The poetikos meant the active, not just the verse-writer: he who engages, thinks, forms his own opinion, gets up and walks when things aren't going how they ought to; which is why Aristotle walked out and started his own school. The Platonic relationship is one in which nothing active happens. So Plato represents the republic of passivity, Pavlov's Dog, league tables, learning by rote, stasis, complicity and uniformity, conservatism and conservationism, Dostoievski's Grand Inquisitor. I think I shall send an email to the BBC Commissioners, recommending that they replace the static-passive statue of Orwell with a 3D moving hologram, or better still a screen on which he can be shown in action, mental and/or physical.

The reason we equate creativity with sex is because there are only two channels human beings have to achieve catharsis.

If you hate violence, and don’t believe in politics, the only remedy remaining is education. Perhaps society is past praying for, but there is always hope for the individual human being.

A man who gives a good account of himself is probably lying, since any life when viewed from the inside is simply a series of defeats.

On the whole human beings want to be good, but not too good, and not quite all the time.

In a society in which there is no law, and in theory no compulsion, the only arbiter of behaviour is public opinion. But public opinion, because of the tremendous urge to conformity in gregarious animals, is less tolerant than any system of law. When human beings are governed by "thou shalt not", the individual can practise a certain amount of eccentricity: when they are supposedly governed by "love’ or "reason", he is under continuous pressure to make him behave and think in exactly the same way as everyone else. 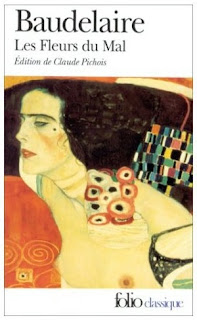 "Les Fleurs du Mal" by Charles Baudelaire, published today in 1857 - and declared obscene and blasphemous before it even reached the review pages - my personal review can be found here


Charles Stewart Parnell, Irish patriot, ruined his political career and put back the cause of Irish independence single-handedly, by marrying Katharine O'Shea, today in 1891